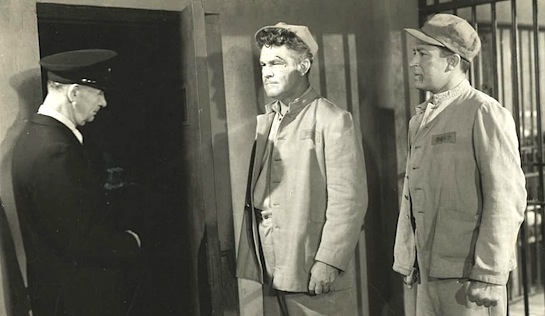 Road to the Big House features one of the most unlikely 180° character flips you will ever see on film. Staid, glasses-wearing, college-educated Eddie Clark (John Shelton) works in a bank. He lives humbly, but contentedly, with his loving wife Agnes (Ann Doran). He even puts up with his friend (and his wife’s ex-suitor) George (Joe Allen Jr), boasting about all the money he has made, showing off with caviar and expensive cigars, and making plays for Agnes. But he then receives a letter telling him that he has finally paid off two plots in the cemetery… and something snaps.

He steals $200,000 from the bank, and books train tickets to escape to Mexico, expecting Agnes to follow him. But Agnes is aghast and will have none of it. While he is out, spending some of his ill-gotten money at a bar, she calls the bank, and tells them that he didn’t have time to put all the cash away. When he arrives home, the bank’s men are waiting. When he refuses to give the money back, they call the police. When he refuses to tell the court where he’s hidden the money, he gets 10 years. When he refuses to confide in his cellmate, Butch McQuinn (Guinn Williams), he gets belted.

Years into his sentence Agnes, whose moral stance he could never understand and whom he has tried to push away, gets sent to see him. If he wants to hand back the cash, she tells him, the insurers will give him 5% and work to get him released. But he has no intention of giving any of it back; he sees it as his right to “(take) our share of life”. He accepts that he must do the punishment – after which he believes the money will legitimately be his.

Still, he gets toey; 10 years is a long time. A former client of his at the bank organises for another prisoner, Clyde Sutter (Dick Bailey) to encourage him to escape. Eddie buys it. He escapes, with guns smuggled into the prison library, where he works. He runs to Agnes, but it is a trap; both the former client and the police are waiting. He goes back to jail with another 5 years to serve.

When his 15 years are up, he is released, grey-haired, but confident of a life of happiness that the money will bring… only to find that Agnes has got there first and has returned it. Oh dear.

It’s a really odd film. Eddie’s sudden transformation from a sober, honest, hard-working man with a loving, frugal wife – to a glasses-off, covetous, self-righteous, recalcitrant criminal never rings true. Nor does his attitude to Agnes, whose difficulty with him stealing money is first met with a sneering, “You’re not developing a conscience, are you?” and then an undeserved rebuke for “… preaching me a Sunday School sermon.” Not sure why should would stick by him after all that, either.

The prison scenes have some of the feel of the big San Quentin films of the 1930s, with tough guys speaking tough, masses of prisoners filling the yard, and curious visiting arrangements where prisoner and visitor sit with a mesh between them, but would be able to pass a machine gun around the open end of the table. But (unless my DVD crudely excised most of the significant scenes, which is a possibility) the prison bits are treated a bit cursorily.

The moral? Money doesn’t bring happiness, it seems, especially when it’s not there. Neither do faulty DVDs. Nor an insufficiency of movie scenes in prison movies.