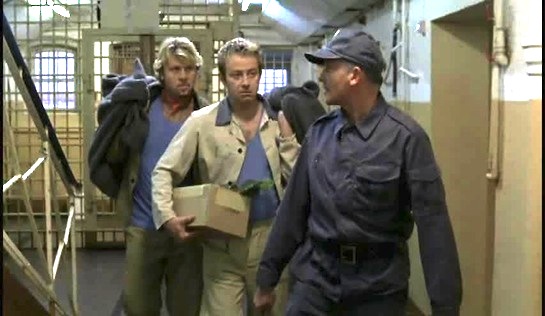 Good prison comedy is awfully difficult to write. If you need to be convinced of that, this film proves it.

Lutek Starr (Micha? Milowicz) and Emil Baks (Olaf Lubaszenko) are two lightweight prisoners, moved to a high security block after Lutek, (desperately wanting a tan), tunnels from their cell into the guards’ room with one month left to serve of his sentence.

Lutek is a popular actor; Emil a screenwriter. Lutek is in prison for pushing his hairdresser out of a second-storey window while mourning the departure of his girlfriend, Beata (Ania Przybylska). Emil claims to have committed a serious jaywalking offence in order to escape his four ex-wives and their many noisy children. Being a comedy, they are of course placed in a cell with a few other wacky characters – including ‘Mince’ (Miros?aw Zbrojewicz), a lifer whose name derives from his method of disposal of his mother-in-law (and who desperately misses his donkey, Hipek), and ‘The General’ (Zbigniew Buczkowski), who conducts himself (and others) as if he were still in the army.

Emil wants to use his time in prison to write a screenplay, and Lutek wants to be in a cell that he doesn’t have to share with Mince or The General. The notion of a screenplay allows the film’s producers to insert into the plot several beautiful women, each an option for the lead role in the unscripted movie. You can tell that a film is struggling for humour when it resorts to the protagonists interacting with beautiful imagined women… and that it is absolutely desperate when it then also introduces Emil’s beautiful ex-wives and Lutek’s beautiful girlfriend as distractions from the lack of wit.

If one is looking for positives, though, one could note that the comedy does not depend on a number of traditional prison comedy staples – the fear of being raped, for instance, or food fights, or even confrontations with a large ferocious prisoner… although it does succumb to a Stir Crazy-esque scene where the two insipid heroes try to bluff their cellmates with their toughness. For laughs it relies upon a very short warden, a home-made ‘white wine’ made from mattress straw and toothpaste, and an escape to see the première of a film, the idea for which was stolen from Emil, and to which Mince takes his donkey and The General attends in uniform. It is very lame fare.

Is there anything that one might learn about Polish prisons? I think not. Mind you, Emil is allowed to take his favourite cactus with him into his cell… Could this start a trend of prisoners being able to bring their favourite plant with them into custody? I think not. 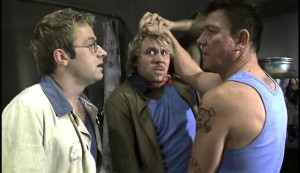 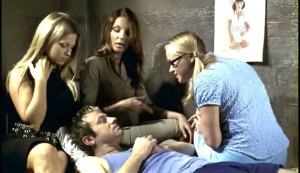