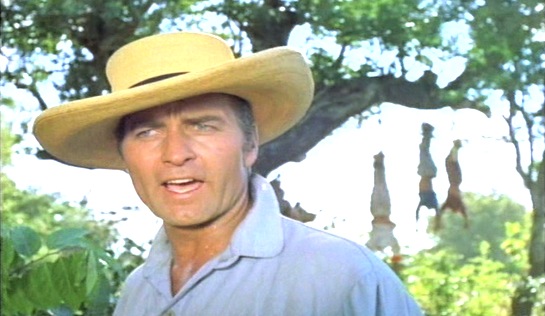 It’s Manila, 1870. The Philippines have been under Spanish rule for 300 years, and the Spaniards run a tight ship. Rebels, dissidents and anyone else who challenges the regime are shipped off with their families to the penal colony on the island of Samar.

Enter Dr John Saunders (George Montgomery), a dissolute American doctor who drank himself into a court-martial in the US and has just wounded a man in a duel over the man’s wife. Through his connections the good doctor is given the option of going to Samar as the penal colony’s only doctor… or going to jail. He opts for the former.

The prisoners on the boat to Samar are jammed into a bamboo lock-up on the deck. In contrast, Saunders, who is not a prisoner, is free to enjoy the company of the beautiful Ana (Ziva Rodann), who is a prisoner but is not locked up with the other prisoners because, it seems, she is beautiful and voluptuous. Ana’s crime is that she is the illegitimate daughter of an important Spanish official and a lowly Filipina, a fact of which she annoyingly keeps reminding him.

Also on board is hard-liner Captain De Guzman (Nico Minardos), the personal aide of the Governor-General, who has been asked to undertake an inspection of the penal colony. He is not happy with what he finds. His major problem is with the urbane Colonel Juan Sebastian Salazar (Gilbert Roland), who runs the village of 1,000-odd exiled critics of the Spanish regime and their families as a humane and peaceful community; De Guzman wants hardship and discipline… and orders the higher-ranking Salazar to return to Manila.

Salazar, however, has other ideas. His plan is to raze the settlement to the ground and to relocate the whole community into the island’s interior; into a lush valley surrounded by gold-ribboned mountains – an area fabled to have been populated by the Spaniards years ago – to free them from the Spanish yoke forever.

He takes De Guzman and his soldiers into custody, and proceeds to lead the whole community – people, animals, carts, two cannons – into the jungle, up over a mountain, through a typhoon, past savages with bows and arrows and spears and poison darts, and through a swamp to the promised land. They lose many to fever, and suffer more casualties in an ambush by more head-hunters. There is plenty of tension; Saunders thinks that Salazar’s plan is hare-brained, the death toll mounts alarmingly, De Guzman attempts to mutiny, Salazar’s wife Cecille wants to return to a life of culture and sophistication, and a pregnant sow might be too tired to give birth after a day of mountain-climbing. And, of course, the inevitable sexual tension between Saunders and Ana is always bubbling away. But they get there. Hooray!

The film is just terrible. Montgomery speaks half the time as though he is making an awkward speech to the nation. So many disasters befall them on their trek that you are waiting for the next one; a swarm of bees or an outbreak of dysentery, perhaps, or a stampede of pangolins? Despite hauling carts and cannons up dusty mountains, surviving shocking weather, attacks from restless natives, lynchings and other travails, Saunders and Salazar remain clean and dapper, the women’s 1960s makeup remains beautifully freshened, and the good guys’ ammunition never runs out. If they cut a path through the jungle to the interior, you have to ask, why wouldn’t their Spanish pursuers simply follow it to find them?

It’s lame. And, despite all the dangers and catastrophes, it manages to be boring. O for Devil’s Island and a real penal colony! 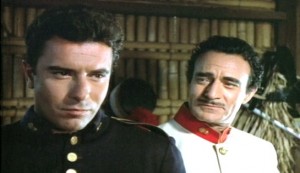 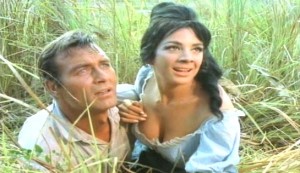