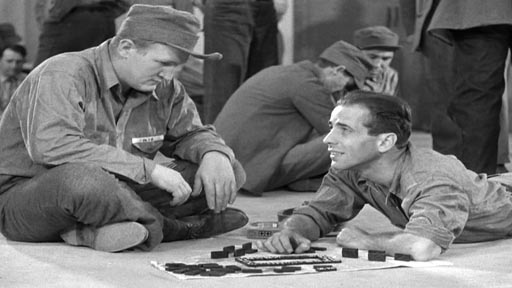 It must be said: this is not Humphrey Bogart’s best film. Shot partly on location in California’s San Quentin prison, it follows an army officer, Captain Steve Jameson (Pat O’Brien), a renowned ‘man-handler’ (manager of men, one presumes), who is seconded to the prison as Captain of the Yard to restore discipline and public confidence. Mind you, what we see when he takes over seems pretty orderly given the whacking great number of prisoners, and there is little evidence of the ‘small riots and… open rebellion’ which apparently prompted his recruitment.

In no time we get a picture of Jameson’s different style; the former punitive regime is replaced by one which is perhaps based on a better understanding of the prisoners as individuals. Complication #1: Jameson must deal with Lieutenant Druggin, who is resentful at having been replaced as Captain of the Yard. Renowned man-manager Jameson does this by saying to him in the presence of a prisoner (and despite the fact that he himself is a novice in the prison system), “When I want your advice I’ll ask for it.” Complication #2: Jameson falls in love with Mae, a singer whose brother, ‘Red’ Kennedy (Bogart), is sent to the prison for rather ineptly shooting at Police. Jameson handles this conflict of interest by treating both Mae (when she is caught passing money to her brother on a visit) and Red very leniently indeed. In Red’s case this preferential treatment is ostensibly because he is a first-timer (even though he’s been in jail before) who needs to be kept apart from the hardened criminals, and he is rather prematurely, it seems, placed on an outside work detail.

Problems develop. The old hands stage a protest at the seeming favouritism shown to the novices, and Red responds to finding out that his sister and the Captain of the Yard could be swinging hands by joining in on an escape bid from the road gang. While on the run he gets shot after improbably being allowed to escape from Mae’s home by the good Captain Jameson, and dies telling the world that he was wrong and that the Captain is really a fine fellow.

There is much to like about the movie: the waistcoated guards, the way that a single punch thrown in the Yard has literally hundreds of men scattering, and the spliced footage of the real San Quentin Yard. Oh, and the benevolence of the Captain when a proselytising prisoner picks up a rifle dropped into the Yard and promptly guns down a guard – in response to which Jameson calmly and unhesitatingly orders that the prisoner simply be taken to the hospital on account of his mental infirmity. But no character is really convincing, other the bitter, hard bitten, demoted Druggin. Bogart, 37 when the film was released, can’t quite pull off the tricky part of a young, bravado-filled new fish who is both part-gangster and part-redeemable.

It has been said that the intended message of the movie was that punitive prisons had run their course; that new approaches were required. If so, it’s a confused message, with Jameson’s judgment seriously influenced by his private life, and his humane approach showing no discernible benefit. 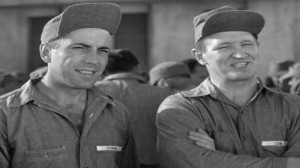