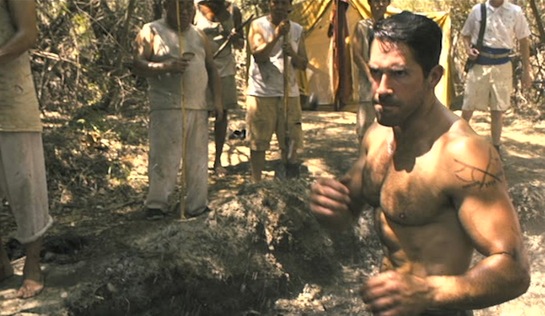 “Set in Indochina in 1959, a former champion boxer… serving hard time in a brutal labor camp must fight against all odds to avenge a vicious act of violence and for his freedom,” says the blurb on my DVD. Codswallop.

Martin Tillman (Scott Adkins) is an Irishman on the run, wanted by the British over IRA bombings (a little more rare in the 1950s than two decades later). And yes, he used to box a little. He’s been in a tiny colonial jail for three years (on a six-month sentence for assaulting a superior officer) in an undisclosed Indochinese country ‘south of Burma’ (Cambodia? Vietnam?), where his ‘hard labor’ consists of participating in a fight club run by the prison warden, escaped Nazi war criminal Hans Steiner (Vladimir Kulich). Steiner’s cronies include two fellow Nazi collaborators also hiding out in the jungle, Señores Jon-Pierre Rastignac (Marko Zaror) and Amarillo (Charles Fathy), and a local ex-paratrooper, Boon (Cung Le), hiding from the Vi?t Minh.

Tillman is released on parole by Steiner very early in the piece to stop a British secret service agent (who wants to take him back to Britain to face those criminal charges, but who also knows too much of Steiner’s past) from hanging around. The Irishman has been visited in prison by a local girl, Isabelle (Juju Chan), who just happens to be Steiner’s disowned daughter, and on release he chases her up, knowing no-one else. He tracks her down to a bar run by an American, Valentine (Keith David), who offers him a job as a bouncer, and whose skills include narrating the story even after he dies.

Tillman naturally falls in love with Isabelle, but is persuaded to go back to working for Steiner’s fight club, where he is so successful in beating all comers that he becomes unbackable. He is then persuaded to throw one fight, not realising that Valentine has bet the deed to his bar on it. When Steiner’s team come to collect the bet, Valentine gets a little agitated and Rastignac gets even more excited and kills him… and then shoots Tillman and Isabelle as well, both of whom he has carried away and buried in muddy sludge.

Of all the mistakes one could make! Rastignac’s men fail to appreciate that neither Tillman nor Isabelle is actually dead, and Tillman rises out of the mud determined to avenge the wrongs of the Terrible Four. He sends Isabelle home and embarks on his mission, armed only with a very cautious Irish accent and a machete.

Of course, Tillman has that innate capacity to dodge 50,000 rounds fired at him from machine guns, while hitting his targets with any of the assortment of firearms he wrests from the Terrible Four’s hordes of guards after he has systematically overpowered or killed them. In addition –

To be blunt: the film is tripe. Many of the fight scenes are terribly choreographed, the action elements are even stupider than most, and the dialogue inane. The prison scenes are incidental. Fortunately, the entertainment in ticking off the sillinesses is probably sufficient to prevent you from taking out your own kidney and eating it. 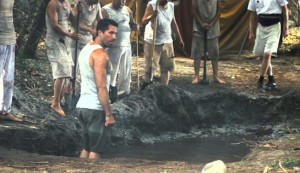 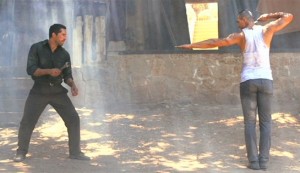