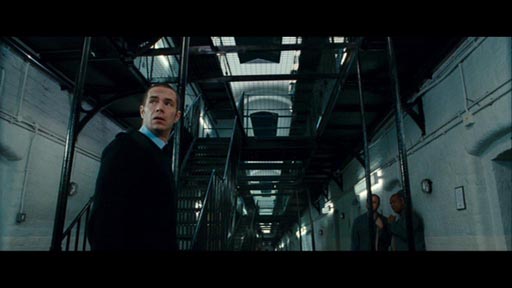 There aren’t many prison movies like this one, where the action is seen from the point of view of a Prison Officer, or even where a humble correctional officer is at the centre of the story: The Quare Fellow (1962), Against the Wall (1993), Fast-Walking (1982), Cell 211 (2009) and not many more… Having said that, it seems unlikely that the British Prison Service will use this one as the centrepiece of its recruitment campaigns.

Screwed is well made and well acted, but essentially all it does is shift the low-life intrigue that surrounds the nastiest inmates in 99% of prison flicks to, in this one, their keepers. It’s far from a flattering portrait of Prison Officers.

Sam Norton (James D’Arcy) has come back home from a tour of duty in the Middle East, where he has experienced his share of trauma, to be reunited with his wife and baby. Struggling to settle back into civilian life, he reluctantly takes on a job at the local HM Prison Romwell, despite major reservations about simply swapping uniforms and foe.

His reservations are well founded. The Prison Officers whom he joins are a feckless lot – beer-swilling, cocaine-snorting, strip-joint-inhabiting… and corrupt. Keenan (David Hayward), their Governor, is not only bent but is intent on sacking staff at the first suggestion that they’ve used too much force against the inmates, hoping to assure his bosses that he is welfare-minded and committed to ridding the Service of unprofessional conduct. One cowardly officer in the Governor’s clique king-hits prisoners but is nowhere to be seen when his colleagues are under attack. Others are much too close to the inmates; it appears to be an open secret that several staff have had their mortgages paid off through their connection to the most influential (ie most ruthless and most drug dealing) of the prisoners, Truman (Noel Clarke). All this noxiousness is pretty standard, apparently, according to ex-screw Ronnie Thompson, on whose experiences the film is based.

I guess Ronnie could have had Sam a white knight, single-handedly leading the fight against the murky mass of corruption. Thankfully, he doesn’t; he makes Sam decidedly flawed himself. Strangely, for a man used to the rigors of battle, Sam starts out remarkably unsure of himself in his new job, although this doesn’t stop him regularly brawling with prisoners. When he becomes more assured, rather than being a beacon for decency in the face of ugliness and violence, we see his own moral disintegration – reliving his wartime horrors, drinking and carousing with his new mates, drug taking, and becoming less and less available to his wife.

At his core, however, is a good bloke, and inevitably the good bloke has to confront those who aren’t, as good blokes must.

It is an uneven film. Some of the complexities of the correctional officer’s role are captured nicely. Some of those are already well documented on the screen: the subtle threats that have to be endured, the invitations to corruption that have to be withstood, the hangings and dirty protests that have to be dealt with. Some are less so: having to manage angry prisoners who have been wound up by unprofessional, undisciplined colleagues; getting caught in the middle of others’ drive to realise their ambition or in their desperate avoidance of accountability. The personality traits of many of the officers are keenly observed, as is Truman’s quiet menace; the film is full of very recognisable prison characters.

But the proposition that we are asked to accept is that because of Ronnie Thompson worked as an officer for seven years the storyline must be credible (after all, his book’s full title is ‘Screwed: The Truth about Life as a Prison Officer’). Yet watching Screwed is much like watching weekly serial killings in those murder mysteries set in quiet little villages; diverting, yes, but we’re surely not supposed to take any of this seriously, are we?

It’s because I think the film asks to be taken a bit too seriously that ultimately it falls short. Truth can be such a subjective thing. 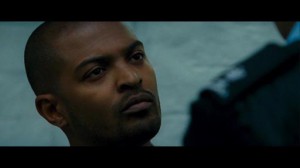 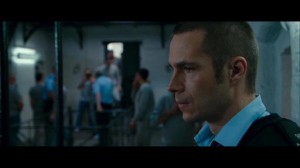