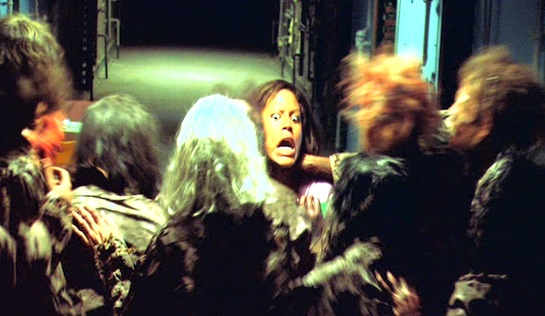 Shadow: Dead Riot appears to be based on a premise that the same sort of people who watch salacious Women-in-Prison films with shower scenes and predatory lesbian guards will also like zombies and gore and exploding body parts. It’s probably solid thinking from a marketing perspective, but the two elements here have rather clumsily been patched together.

The story starts in the early ‘70s with the imposing Edward Marquis, aka Shadow (Tony Todd), who has been convicted of 22 counts of murder (including four police officers) and a dozen rapes. He has a predilection for sampling blood from expectant mothers in order to make him immortal. But when he is executed by lethal injection the sheer evil in him makes the whole exercise go horribly wrong; his blood defies gravity, his body explodes, other prisoners riot, guards are killed… and in response a mass grave-full of prisoners are shot dead.

Twenty years later the same prison (competently played by Philadelphia’s Holmesburg Prison) has been reinvented as the Ellis Glen Experimental Rehabilitation Facility for Women, but while its programmatic elements might have experienced a makeover and the prisoners wear bright pastel uniforms, the prison remains untouched.  It is its old, dilapidated, ugly self.

A young prisoner who wants to be known only as Solitaire (Carla Greene) is received into the prison. She has committed an unspecified murder, and is soon defending the weak against the prison’s top dog, Mondo (Tatiana Butler), upsetting Warden Danvers (Nina Hodoruk) and the rapacious head of security, Elsa Thorn (Andrea Langi). She fights, and fights well. She soon finds herself in a cell in solitary, where she immediately senses a connection with something dreadful from many years before.

The experimental rehabilitation of the women is constantly being undermined by Thorn and the prison’s male doctor, Dr Swann (Michael Quinlan), who is equally lascivious and problematic. Swann injects the women with a course of vitamins, but some he also injects with portions of Shadow’s blood, which he has kept in solution for 20 years, to see if he can harness the dead man’s power. Uh oh.

Things start to happen. Solitaire’s cellmate, Emily (Cat Miller) gives birth prematurely to a fierce little mutant baby who starts attacking people as soon as it’s released from its humidicrib. Blood from Emily, another young bullied prisoner and Mondo seeps into the ground above the mass grave in which Shadow and the other prisoners were buried, and soon there is a troop of enlivened zombies pushing up through the ground.

Naturally enough, they wreak havoc and ultimately (after much blood and guts) it comes to Solitaire and Shadow to face off – and face their connection – in a battle for supremacy.

It’s hard to judge the experimental program (“We’re not about punishment. Oh no. We are about spiritual rehabilitation through physical improvement; a diet regimen, and a work regimen,” says Warden Danvers) when the women are being punished and sexually abused and we see nothing of their diet and almost nothing of their work. Maybe it’s the prison’s inherent lack of integrity that the zombies rise up against; something has to be done to re-establish its core values and shift it from being just like every other WIP prison.

This is a largely predictable, fairly tawdry offering made watchable only by a few inspired gory moments and a bizarre mutant infant. 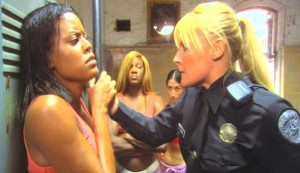 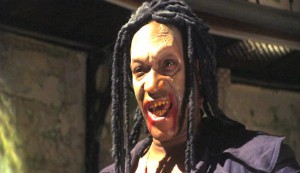