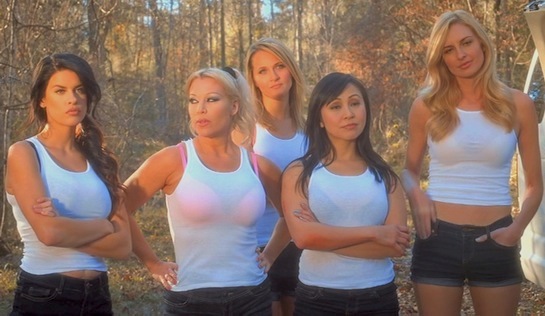 The best thing that can be said about this movie is that it might not always take itself too seriously. You sort of get that sense when a sign says, ‘Arkansas State Prison for Women’ and then, unconcealed in the background, there are signs setting out the daily fees for people using the facilities on the campsite office that purports to be the prison. Or when the five prisoners are taken on work detail to remove random tree stumps at no particular place in the middle of a swampy forest. Or when the senior guard, Carl, wears a name badge which reads ‘J Millet’.

The very unlikely prisoners with perfect hair and makeup are Sarah Mason (Skye McDonald), Michelle Akila (Christine Nguyen), Shannon Hastings (Amy Holt), Samantha Pines (Tabitha Marie) and Anita Conners (Cindy Lucas). In a piece of awfully nasty luck, some nearby fracking activity has opened up an underground ocean, releasing prehistoric sharks into the Arkansas waterways. But these are no ordinary sharks; apart from their traditional attraction to blood (an attraction that proves fatal to poor Samantha as she washes a wound in some water), they also have the ability to attack on land – power-burrowing just beneath the ground’s surface, with only their dorsal fins showing through the topsoil and leaving furrows in their wake.

But that’s not the prison story, oh no. As the party leaves the worksite (minus Samantha), the van is ambushed by Anita’s lover, Honey (Dominique Swain), who is intent on springing Anita and who forces the two guards to hand over their firearms. Several of the women line up to escape. But before anyone gets too far the ravenous prehistoric land sharks intervene, and soon everyone has access to a gun and is firing at anything that resembles a fin. And the human numbers dwindle.

What should be joyful, tongue-in-cheek silliness is too often weighed down by dialogue that is dull and bereft of wit, hammy acting and a leaden plot. Only the canny CGI sharks – that clinically devour Samantha, leaving nothing but a bloodied singlet, yet leave other victims messily butchered into pieces and then dismember Sarah’s leg without eating a single piece of her – consistently provide an element of unpredictability to the story.

Sadly, the film’s title is the best part of the film. 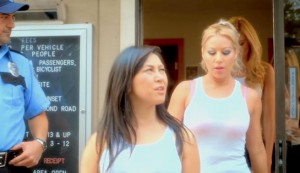 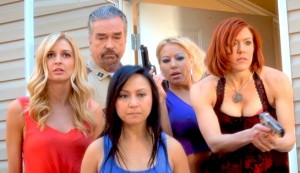 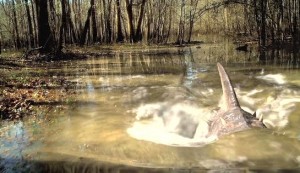 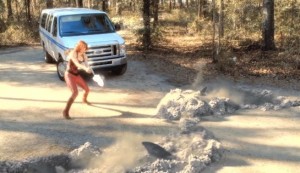