1. I know it’s not a prison movie; the prisonny bits are not the main game. 2. I know that prisonny bits are not exactly prison, either; the pedantic would call it an animal containment centre, or pound, or shelter for lost, seized and abandoned (read ‘socially disadvantaged’) animals. 3. I don’t care. The containment centre is a prison and is full of wonderful prison clichés. But I do have to admit that it’s a little unusual for a jailer to personally pursue his detainees after they have escaped.

The story is straightforward. Shaun is tired of his humdrum existence, and seeks to give himself and all the other sheep a day off. They conspire to have their farmer sleep through the day in a caravan… but the ploy backfires. The caravan breaks loose, rolls into the Big City, the farmer loses his memory, and the team have to go into the city to find him and bring him back. And while they’re there, Shaun, sheepdog Bitzer and Slip (a wonky-toothed stray city dog whom they befriend) get locked up by the officious Chief Containment Officer, A. Trumper, and the rest of the team have to break them out.

It is a delight.

The pound’s cells are full of prison stereotypes: amongst them a tough guy, a body builder, a tortoise slowly marking off the days, a fixed-stared psycho, and a goldfish who plays a mournful blues harp. And the cellblock scenes feature the only escape I’ve seen which is facilitated by a chalk drawing of a hole in the wall – that leads Trumper to believe they’ve already scarpered.

It’s a terrific, witty, gentle-humoured animation, and the prison scenes alone are worth the price of admission. It’s one of the very rarest of beasts: a prison comedy that is funny. And there’s even a surprise nod to Shawshank in the credits. 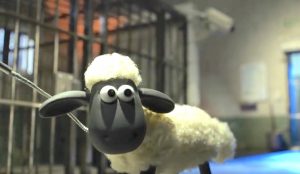 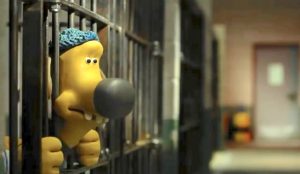 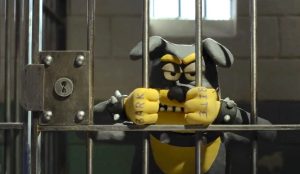 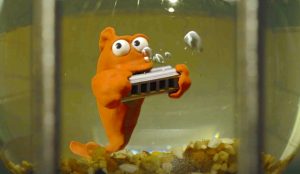 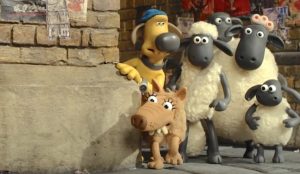 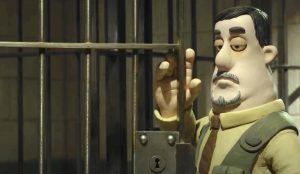