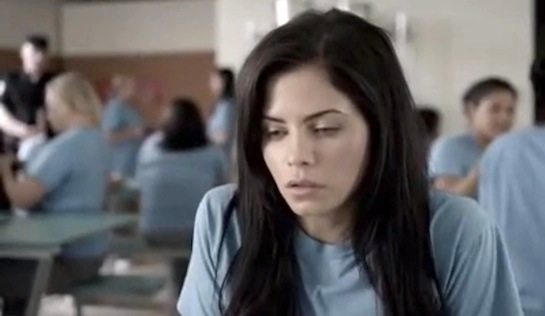 It’s quite possible that nothing much is going right for Sarah Jo Pender; she might or might not be guilty of a double murder in 2000 for which she is serving 110 years in prison, and there’s a good chance she’s still in solitary confinement after escaping from Indiana’s Rockville Correctional Facility in August 2008. But at least she can sit back be well pleased that they chose Jenna Dewan Tatum to play her in this made-for-TV film; the choice flatters her immensely.

Dewan Tatum’s attractiveness shouldn’t be an issue, of course. But it does show the dilemma that the filmmakers have had. Pender is characterised as a ruthless manipulator, but also as beguiling and something of a femme fatale, and the truth is, she’s a relatively plain woman. How do you convince a movie audience that Pender is capable of getting all sorts of people to do all sorts of things for her? You cast her as beautiful… it’s much easier than having to convey through other means the sort of charisma needed to drive others to do really questionable things on your behalf.

In real life Pender was convicted, along with her boyfriend Rick, of the shotgun murders of two roommates. They were dealing drugs to help pay their way through college, and Pender wanted the two victims to leave the house. Her story was that she returned home from a walk and that Rick had killed them; that she then helped him dispose of the bodies in a dumpster through fear and stupidity. The prosecution suggested that she had organised the shooting and pointed to the fact that she had bought the gun the day before. The case against her relied in part on a letter it was claimed she wrote to Rick, admitting her role – a letter she has maintained was a forgery. She was 21 at the time.

The film suggests that after being a little overwhelmed at the start of her prison term, Pender grows quickly in both confidence and influence. She is helped to cope through her early months by a maternal prisoner, Jamie Long (Mackenzie Phillips). To prepare for her appeal, she starts reading law books, and does some good by helping other prisoners with their legal matters. She helps a mother, Farrell (Lisa Marie Caruk), retain custody of her three kids. She helps a new prisoner, Paula (Nneka Croal), adjust to prison. And she helps a prison guard, Scott Spitler (Nels Lennarson), to spectacularly betray both his wife and his employer by having sex with her, bringing in drugs and phones for her, and ultimately helping her to escape. Then, while on the run, she almost persuades a wealthy businessman to throw in his whole life for her.

Pender is portrayed as an unmitigated user of people, using her beauty to seduce them, and inspiring a loyalty in her train of followers that is never reciprocated. The film nicely leaves the question of whether she was guilty of the murders very much in the balance; if she happens to be innocent, as she claims, it makes her single-mindedness in trying to secure her freedom a bit more forgivable. Indeed, even her drug trafficking enterprises, established firstly to fund her college tuition and then, in prison, to fund her appeal after her father’s resources run out, seem more benign if one accepts that they might not be motivated purely by greed.

Guilty or not, Pender cruises through prison, even if it is a slightly unusual women’s prison. Now, I concede that guards having sexual relations with prisoners in films is not so uncommon, prisoners sharing other prisoners’ beds is not uncommon, and trading in drugs (albeit prescription drugs) and phones is pretty standard also. What is more unusual is that the prisoners in this movie prison seem to coexist happily together, the superintendent is decent and not at all corrupt, there are no power plays, there are no fights and not a even cuss word to be heard.

It seems a little sanitised (as one might anticipate, I suppose, from a Disney-associated Lifetime production). Just as Dewan Tatum gives us a prettied-up version of the real-life Pender, the movie prison is conceivably a prettied-up, deodorised version of Rockville – even allowing for the drugs and the sex. Or it might not be; it doesn’t really matter. It’s Pender’s story, after all, not the prison’s.