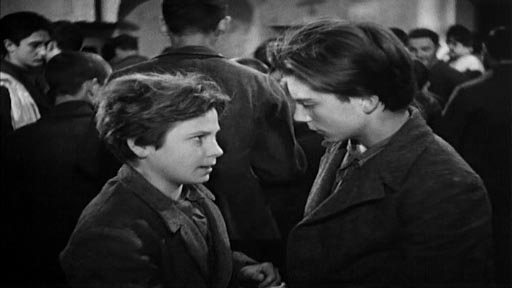 It follows the fortunes of two boys, Giuseppe (Rinaldo Smordoni) and the older Pasquale (Franco Interlenghi) – two of many street urchins in Rome eking out a living shining the shoes of US servicemen. Pasquale is orphaned and living in an elevator. Giuseppe comes from a poor family, but his (much older) brother Attilio seems to be living comfortably enough as a criminal and black market racketeer.

The two streetwise boys are best friends and have a shared dream – to own the horse they ride whenever they can. Attilio gives them some American blankets to sell to a well-to-do fortune teller. As the deal is being struck, Attilio’s gang enter the woman’s house, posing as Police and accusing her of handling stolen goods; they usher the kids out, give them a big tip, and steal 700,000 lira from the woman.

Giuseppe and Pasquale finally have enough money to buy their beloved horse and keep him stabled, but their time with him is short-lived; the woman is quickly able to identify the two boys, and they are thrown into juvenile prison.

With Rome recovering from the war and its people struggling through tough economic times, it’s hardly unexpected to find the prison overcrowded and with harsh conditions – five boys crammed into small cells, bad food, cold showers, poor medical care and older and younger boys thrown in together. The boys are surprisingly ruly (other than having a propensity to protest loudly whenever one of their number is being treated unfairly – oh, and a bit of a riot), and the guards seem more overwhelmed and corruptible than vicious and unfair.

Giuseppe and Pasquale are purposely split up into different cells. The Police attend the prison to question them again, once more seeking the identities of those for whom they were working. They both staunchly refuse to give up Attilio and his gang… until Pasquale is tricked into thinking that Giuseppe is being beaten in the room next door and blurts out the names to get the beating to stop.

This abruptly spells the end of the friendship. Although Pasquale divulged Giuseppe’s brother’s name solely out of concern for his younger mate, Giuseppe brands him a traitor and has him set up with a file in his mattress – an offence which has the older boy beaten and put in solitary.

All the boys’ uncompromising stance on providing information to Police mimics that of much older, hardened criminals. There is nothing in the boys that distinguishes them from older prisoners in their attitudes – they may as well be adults in an adult jail. Giuseppe is however awfully conflicted; he hates Pasquale’s weakness, his breach of the criminal code and the impact it has on his family, but the memory of the friendship they shared is nonetheless powerful and he is constantly on the verge of forgiving him.

When their case gets to court, Giuseppe and Attilio’s lawyer puts the blame squarely on the poorly represented Pasquale; Giuseppe gets one year and Pasquale two. But Giuseppe has no intention of staying around. He joins his much older cellmate Arcangeli (Bruno Ortenzi) in a mass escape bid during a film night. Several of their co-escapees get captured, but Giuseppe and Arcangeli get away. Pasquale tells the authorities he knows where they will be headed, and leads them to their horse’s stable.. where the two boys have a final dramatic confrontation.

Now, I know nothing of director Vittorio De Sica’s politics, but there seems to be a strong theme running throughout about the tragic disintegration of all that shows promise; the loss of the dream horse and the temporary break from poverty and hopelessness that it represents, and the collapse of a friendship that seemed unassailable.

Were it not for the fact that the film won an honorary Oscar, I could have been tempted to see those things as a metaphor for the lost potential of the European Axis (and reflecting the resentment of the Italian people being reduced to shining US troops’ shoes during the post-war occupation), rather than simply a portrait of people contending with moral dilemmas and the impact of social policy in hard times.

I’ve been rebuked recently for subordinating the artistic merits of a film to the merits of the film as an exposition of the prison experience. Guilty as charged. But this is a both a terrific film and an excellent movie about prison; sad, sobering and very much worth a view. 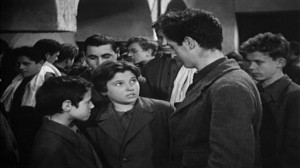 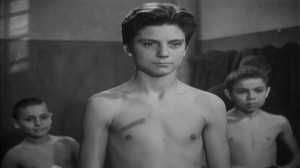