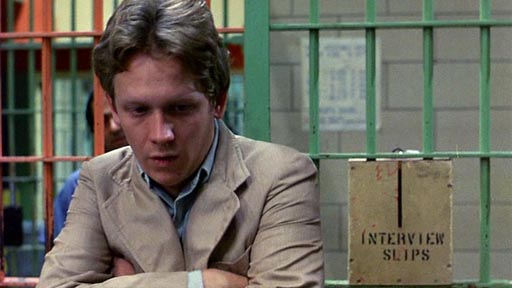 First written by Miguel Piñero as a play while he was a prisoner in Sing Sing, and then shot in ‘The Tombs’ – the Men’s House of Detention in Manhattan, it’s not surprising that this has an authentic feel to it.  Piñero also played a minor character in the movie, but missed its premiere as he was back inside on an armed robbery charge.

The film is very theatrical – an ensemble cast all working within the confines of a small cell block and day room.  The prisoners are almost all either African-American or Hispanic, with very clear hierarchies and rules of engagement. Enter into the cauldron a white ‘short eyes’ (slang for child molester), Clark Davis, whose crimes are very quickly and publicly exposed by a… well, unsympathetic guard.  Strangely, while all the prisoners display their contempt for the newcomer, no-one touches him – at least initially – and Davis (maybe with a death wish) doesn’t seek protection although it’s open to him to do so.  The film’s turning point is when he is challenged by fellow prisoner Juan (José Pérez), who is the moral anchor of the film.  Davis says that he doesn’t know whether he raped the child or not, but then unwisely and graphically confesses a lengthy history of offending against children.  Juan, who is also trying to protect a young Hispanic prisoner who is the object of the other prisoners’ lust, is sullied and repulsed by the disclosure, but searches for a human response – trying to ward off the descent into barbarity that prison encourages.  Ultimately, the key moral question about what to do with the child rapist is the one issue which unites the mob, and the film doesn’t fail to highlight the irony of men who have been ripping each other off and queuing up to have sex with an unwilling youth, queuing up again, full of moral righteousness, to denunciate Davis’s actions. With the assistance of the complicit guard, the end result is inevitable, although there are a few final twists.

It’s gritty, it’s real, but it’s a bit like shooting fish in a barrel: you’ve got to ask would there be a story if the paedophile wasn’t improbably dropped him into that environment in the first place?