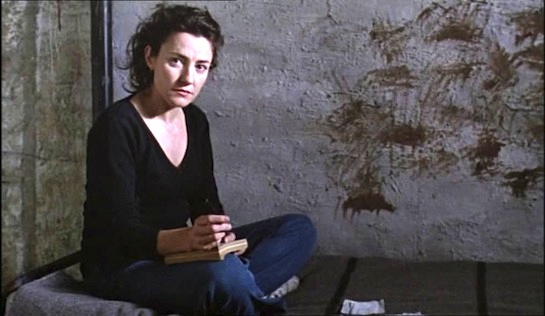 In 1976 the British Government put an end to the special category status of prisoners from the Provisional Irish Republican Army, no longer treating them as prisoners of war, but as common criminals. Mairéad Farrell – on whose life much of the film seems to be loosely based – was the first woman Republican to be refused political status in 1976. By 1980, when the film is set, Margaret Thatcher was Prime Minister and doggedly resolute: “There can be no question of political status for someone who is serving a sentence for crime. Crime is crime is crime.” Silent Grace seeks to capture the struggle for the restoration of political status that was at the heart of prison protests in Northern Ireland  – not just by the more celebrated male prisoners – but by a smaller number of women prisoners, led by Farrell, at the Armagh Women’s Prison.

This film does not set out to tell Farrell’s story, but tries to give a truish account of the battle in 1980 between the Republican prisoners and the British Government, of which the prison system was a very tangible symbol. So contested are the facts, so complex the issues and the views so polarised, that it is an impossible task to be seen by all to do that accurately and fairly.

The tussle is retold in part through the story of Aine Quinn (Cathleen Bradley), a petulant rebel-without-a-cause, who claims at her joyriding trial to be member of the IRA, simply in order to refuse to recognise the authority of the court. That is enough for the prison authorities to place her in the Republican pod at Armagh to serve her 12-month sentence, which pleases neither her nor the genuine Republican women, led by the wise (and tenacious) Eileen (an excellent Orla Brady).

It’s not the most settled of times. Following a raid by prison officers to seize black dresses and berets worn by the women in a paramilitary assembly (how the outfits got in is a bit of a mystery), the women are confined to their cells and not able to use the toilets for several days. It’s at that point that they decide then to join the men in their dirty protest – smearing faeces from their unemptied slop-buckets onto the walls. Welcome, Aine.

Aine is, unfortunately, immature and obnoxious. She rejects approaches from the others and soon finds herself frozen out by them. She feels even less well disposed to her new associates after she learns that her boyfriend has been killed by the Provos. It falls to Eileen to comfort her, calmly assuring her that he “must’ve been warned” before they killed him.  That knowledge, for some unfathomable reason, seems to settle Aine down. Eileen schools her in the cause and ultimately Aine agrees to participate in the dirty protest, “with dignity.” It doesn’t stop her trauma though, and it is again Eileen, who has become her cellmate, who gets her through the toughest times.

Eileen is the the only character drawn with much depth. She is a warm mother figure, a charismatic leader, and frighteningly committed to the cause (as one might expect). She asks Aine what she thinks of the cold-blooded shooting of a prison officer outside the gaol. “As far as screws go, she seemed all right,” offers Aine. “That is emotion,” rebukes Eileen. “You can’t afford to be sentimental. I’m asking you whether this was an effective form of military action?” As the highest-ranking of the women, it is Eileen who negotiates with the prison’s Governor Cunningham (Conor Mullen), with whom there is a grudging respect and some sexual tension (at least on Cunningham’s side). But she is not about to be seduced into giving up the fight, and when the men start hunger striking, Eileen insists on joining them.

The film has something of a stagy and somewhat sanitised feel. Shot at the wonderful Kilmainham Gaol, one only gets to see (and hear) a handful of prison officers and no other prisoners outside the Republican pod – for budgetary reasons, no doubt – but it seems slightly unreal. One gets a feel for the stench of the cellblock, but not the filth, the maggots and the rotting food; the women continue to look quite presentable in clean clothes. That doesn’t quite ring true, either.

There is some hint of the fear and anger of the prison officers when their colleague is gunned down by the IRA – a drunken rally and a nasty unprovoked attack on one of the women – but the sympathy is saved more for the prisoners’ stoicism, their ingenuity and their cause. The film seems more interested in relationships (Aine and Eileen, Aine and her mother, Eileen and Cunningham, the women and their menfolk) than the devastation caused and ruined lives on both sides.

It will inevitably be seen as a companion-piece to Hunger (2008). It is worthy but lacks the latter film’s power. 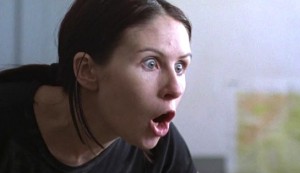