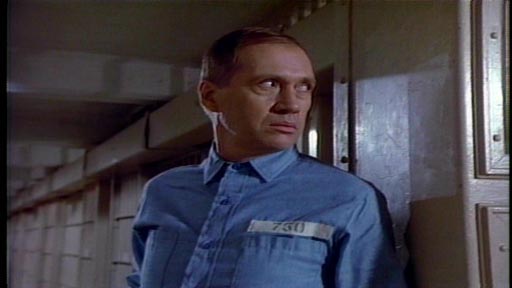 You’d think that this should be a terrific movie, based as it is on the bloodiest escape attempt in Alcatraz’s history – dubbed the ‘Battle of Alcatraz’ – in which two guards and three inmates were killed in an abortive bid for freedom over 48 hours in May 1946. And it was shot on location, which gives it some cred, straight away. But while it’s not a bad film at all, it’s as if someone has surgically removed the adrenalin. Too many prison movies make the mistake of  ramping up the drama and losing something in the process; I reckon this one goes the other way.

Bernie Coy (David Carradine) is doing a long stretch for armed robbery. He’s an orderly, delivering library books and other orderly things, from which position he has plenty of time to meticulously observe the guards’ routines. He enlists the help of five others. The plan is to get weapons, break out into the yard, head over the wall and hijack the boat back to Frisco.

It starts well. They create a diversion and overpower one guard. Coy, a small, skinny man in real life but not quite so small and skinny as played by Carradine, scales the wall up to the barred roof of the Gun Gallery and, using a home-made bar spreader, creates enough space to slip through the bars and into the secure area. He takes out the guard returning to his post, and starts distributing weapons – with which the rest of his crew proceed to take a succession of guards hostage. (Nine, in the true story). So far, so good.

But when they come to grab the key to let themselves out into the yard, they can’t find it. In real life, Officer Miller hid it in the toilet, and it seems it stayed there undiscovered. In the filmed version, added tension is built by (a) them not finding it, (b) Coy guessing correctly that it’s in the toilet, (c) another key getting stuck in the lock, (d) that key falling out of the lock! and (e) the lock jamming even with the right key. Hmm.  Meanwhile, the boat comes and goes, and their chances of getting out disappear with it.

But all this happens in the most eerie quiet. While this is all happening there are other prisoners locked in their cells (and others locked out in the yard). None of them yell out. None scream to be included in the break-out, or cheer as another guard is taken hostage, or offer advice. They maintain a respectful silence throughout. And the escaping men themselves remain relatively calm, considering. No panic, nothing frantic. One man can’t get the key out of the lock. No-one else yells, “Let me try!” or has a bash at it; they all just sit around, dispirited and defeated. They don’t try shooting the lock or smashing it; they simply acquiesce. Trapped. The phone rings. They all turn to look at it, in suspended animation. In silence. Coy gets really tired midway through the incident and has a nice, restful sleep. Only the edgy, psychopathic Joe ‘Dutch’ Cretzer (Howard Hesserman) and the erratic Sam Shockley (said to have an IQ of 54 and played by Charles Haid) get remotely excitable, and that’s more about exacting revenge on the guards than finding a way to bust their way out.

Even when all is lost, the Six don’t let all the others out of their cells for a decent riot or to cloud their own responsibility. While Coy has insisted on a ‘clean’ break (knowing that they will all be executed if a guard gets killed), Dutch has other ideas. He shoots the guards, knowing that they while they live, all the participants can all be identified. Most of the guards somehow survive. Most of the prisoners do not once the Warden, Jack Johnston (Richard Dysart), calls in the Marines, who fire tear gas and grenades. And put all the non-participants at just as much risk. Three of the Six are killed; two are subsequently put to death, and one, 19-year-old Dan Durando (based on the real-life Clarence Carnes), was spared after showing some compassion to the guard hostages.

It’s not the worst film of its kind. Carradine and Hesserman are solid, and Alcatraz itself provides a great, stark theatre in which the drama can play itself out. And the plot would appear to be pretty faithful to the actual events of 1946, even depicting the role of ‘Birdman of Alcatraz’ Robert Stroud with some accuracy. I just would have liked a bit more noise, a bit more mayhem. 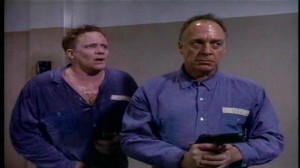 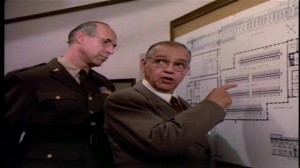