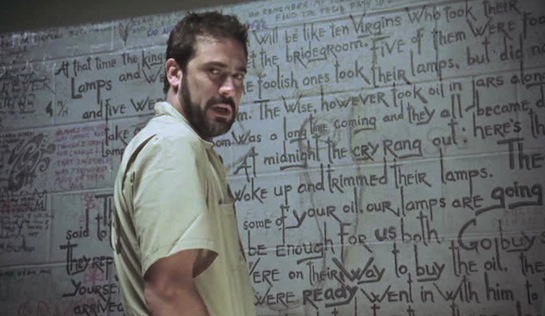 When I saw the publicity for this film refer to “the edge of Armageddon” and a small band of rebel prisoners’ “only true hope of salvation in a condemned world”, I didn’t think it was talking about the literal (i.e. Biblical) Armageddon. Or that ‘salvation’ meant ‘Christian salvation’. But that’s exactly what is meant.

The film is based around the prophesied Antichrist, the ‘beast’ in Revelation who “forced everyone, small and great, rich and poor, free and slave, to receive a mark on his right hand or on his forehead, so that no one could buy or sell unless he had the mark, which is the name of the beast or the number of his name.” (Rev 13: 16-17). It is set at a time in the very near future when an all-powerful dictator, The Leader, has taken control of the world, and everyone is required to receive an implanted chip that gives you extraordinary longevity and access to essential services, but also compels you to receive The Leader’s thought-altering messages. Brainwashing via satellite.

There are some people, however, who have held out; Christians, mainly, and some others who have bravely refused the implant. These rogues include an unlikeable car thief, Brody Sutton (David AR White), and his less-offensive co-offender and computer-hacker, Jerry Willis (director and co-writer Kevin Downes). And an ex-cop, Tom Newman (Jeffrey Dean Morgan), who has been put in to the authorities by his estranged, implanted wife, Jeseca (Amy Moon), who has risen to a position of seniority in The Community. Tom is tortured until he agrees to kill Elijah Cohen, an elusive Christian leader who is proving a bit of a nuisance… and is sent to prison to infiltrate the Christian circle and find a believer with whom he might escape in order to lead them to Cohen. Brody and Jerry are sent to the same prison.

The Community runs a nice modern prison full of implant-refusers – all of whom are given a month or so to accept the implant or be executed by guillotine. The most remarkable part of the prison is its cell walls, which have been totally covered by the Christian prisoners with pieces of scripture and inspirational graffiti. It seems a little odd that a regime which has reportedly exterminated 80 million people in North America alone would tolerate such subversive behaviour by its opponents, but it does. The Christians are awkward for the regime as they are ‘not afraid to die’, which makes it more difficult for it to cultivate a fear of the guillotine and deliver more and more people ‘willing’ to be implanted.

One of the Christian prisoners, Luke (Stephen Baldwin), is given the task of explaining the Christian path to salvation to the viewer. He is a little intense and, regrettably, lacking in charisma… and has an annoying (to the non-believers) habit of prophesying and otherwise demonstrating that he has a direct line to God. He knows exactly what Tom’s plan is, for example. Brody remains sceptical of the Christian message, but Jerry is won over and gives his life to Jesus. This is helpful for Tom, who now has someone to escape with.

They escape remarkably easily: Tom, Brody and Jerry. Jerry tries to hack into the regime’s computer, hoping to break the satellite link with people’s implants, but is thwarted. They escape again (with a little help from the ubiquitous Elijah Cohen) and make their way to the Christians’ safe haven, Prodigal City, but after they leave Tom and Brody are caught and tortured, their pale-faced torturer looking even more like a badly made-up chemotherapy survivor than in the first part of the film. “I forgive you,” cries Tom to his tormentor when he reaches out to Jesus in his pain and he, too, is saved.

It is a film unlikely to appeal much to any audience. For believers it is an overly long and largely ponderous warning: ‘be prepared, like the five wise virgins’. For non-believers, the recital of the Christian end time message is hardly one that is likely to have them scampering off to seek spiritual succour.