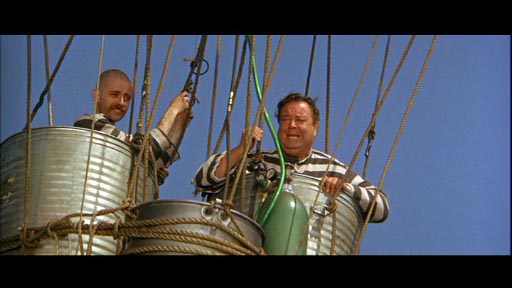 Skidoo has all the things that you’d expect to see in a psychedelic 60s comedy – hippies, acid trips, groovy outfits, body painting – and some you might not: a prison escape by a home-made hot air balloon, Harry Nilsson singing the credits, and a sadly unfunny Groucho Marx.

It boasts an extraordinary all-star cast; including some unlikely prison movie actors such as Jackie Gleason, Carol Channing and Marx, some much-more-likely ones in Mickey Rooney and George Raft, and a couple of pop singers in Frankie Avalon and Nilsson for good measure.

Gleason plays ‘Tough’ Tony Banks, a retired enforcer for the mob, who has settled down, a bit uneasily, with his wife Flo (Channing). Although he’s not at all keen to get back into the business, he’s persuaded (by virtue of his mate Harry being offed, which provides him with just the right sort of incentive) to do one last job: to go into Alcatraz to ice George ‘Blue Chips’ Packard (Rooney) who has ratted on the mob.

He finds it surprisingly easy to get into Alcatraz, and even more surprisingly is confident of getting out as soon as he’s done the job on Blue Chips. But he finds he no longer has the appetite to be a hit-man and, with the assistance of Fred ‘the Professor’ (Austin Pendleton), who can fix anything, he escapes in a hot air balloon instead while all the prisoners and tower guards are tripping on food the Professor has impregnated with LSD.

Meanwhile, a range of assorted characters descend on the boat from which ‘God’ (Marx), who is at the top of the mob’s tree, conducts business – most of them looking to rescue Tony. They include Flo, their daughter Darlene and scores of her hippie friends, and the smooth up-and-coming gangster Angie (Avalon). It seems they needed plenty of extras for the song-and-dance finale.

The film was panned when it came out for being directionless and cliched. It hasn’t got better with time.