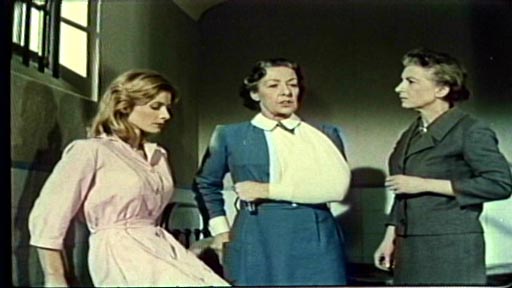 It’s hard not to enjoy a movie about a progressive girls’ borstal where the main character, Ann (Jill Ireland), is warned that her monthly visit with her father must be short, and the visit is then terminated after precisely 1 minute 12 seconds. When she pleads for a little longer, she’s told, “I’m afraid the rules have to be obeyed.” Wonderful stuff.

The film begins with two young women breaking into a safe in a house where one of them, Lucy, used to be a maid. They are caught red-handed by the butler, but the other girl, Claire, whacks him over the head before she too can be identified, and they escape. Before she is arrested, Lucy goes to the hip little coffee shop where all the hip young people listen to live music and dance, and drops a piece of the stolen jewellery into the coat pocket of a pretty young innocent, Ann, who has usurped her as the object of the guitarist’s romantic interest. Lucy then spitefully tells the coppers that it was Ann who was her accomplice, and of course they discover the jewellery, and of course Ann gets wrongly convicted.

Both Lucy and Ann get sent to Wilsham, an open borstal for girls. Soon after arrival, they have a fight, Ann seemingly being unhappy about being framed. It appears that due to an oversight they didn’t get round to having that conversation during the entire court process, preferring to save it for prison. Ann is a goody-two-shoes, very much out of place in the borstal, and keeps protesting her innocence… and Lucy is quickly able to turn the other girls against her and get her into trouble.

The Matron is fair-minded and modern, but the Chief Wardress, Miss Smith (Ellen Pollock), is neither. Miss Smith is bitter that she was overlooked for the Matron’s position, and believes that the girls are treated too leniently. Like Matron Harper in Caged (1947) Miss Smith is the person who really runs the show, and she wilfully undermines her boss’s progressive approach. She’s also a bit lame in one leg and carries a walking stick, which adds to the sense of her as regressive, sinister and hateful. A most unfair observation of people who are compelled to use walking sticks, obviously, unless they also use them to hit things and are sinister and hateful to start with.

Already seen as thinking that she’s ‘a bit good’ for the borstal, Ann is given a cushy job doing secretarial work for the Matron, which makes her even more unpopular with the girls and Miss Smith. Her one friend, Mary, who is sweet, a bit naïve and the longest serving of the girls, is told that she is finally going home. The girls throw a party for her after lights out, but the ubiquitous Miss Smith (she’s on duty to wake the girls up and is still working late at night) catches them and puts Mary in solitary, telling her that she’ll now have to serve another 12 months. In the morning, the Matron scoffs at the suggestion that Mary will be penalised at all, but it’s too late – tragically, they find Mary hanging. The girls (all except Ann, of course), take matters into their own hands and bash Miss Smith (not particularly well, though; she escapes with just a bung arm) and smash everything in the mess hall. They all refuse to nominate the ringleaders and Ann, too, refuses to nark on her fellow detainees.

Gradually the girls come to realise that Ann is of better character than her tormentor, Lucy. One gives her a tip about a pawn broker, ‘Dear Old’ Moran, who might help her get out of her predicament. Ann promptly escapes (!) to prove her innocence and it is Lucy who raises the alarm, hoping to get her into more trouble; Lucy is then seen by all for what she is – a vicious person of no character, and a nark. Meanwhile, Ann returns to London and tells her beau, Tom, to chase up this Moran fellow; she then surrenders to Police. When she is returned to Wilsham, she is again stood over by Miss Smith to name the ringleaders in the attack upon her, but this time the intimidation is witnessed by the Matron. Miss Smith resigns rather than be suspended. Hooray! And then, of course, Moran is able to lead the Police to Claire and Ann is exonerated. Double hooray!

The title of the film is quite misleading. Of the girls, only Lucy seems remotely evil, and few seem very young. It is a very traditional prison movie, really – the ingénue wrongly accused, a nasty prisoner, a nasty wardress, a ritous disturbance, an escape… It’s very snappily put together, and good triumphs in the end. Ireland is perfect in the role of Ann, playing her with a wooden, serene dignity, and Pollock does a nice line in understated malevolence and thwarted ambition. It’s by no means a great movie, but it’s eminently watchable. 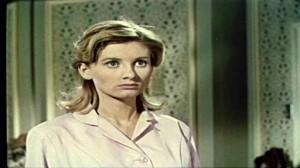 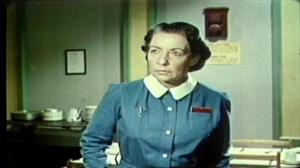