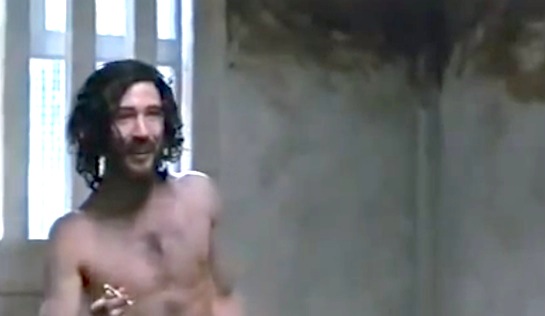 It’s over twelve months since I finally caught up with the Irish film H3 and then declared that I was in no hurry to see another movie about Bobby Sands, the dirty protest or the Troubles. But here I am, back again; I’m clearly a sucker for a dirty protest.

I suspect that Some Mother’s Son wasn’t the first film to deal with Bobby Sands and the dirty protest, but it came before the other ones I’ve seen – Silent Grace (2001), H3 (2001) and Hunger (2008). And it takes a very different tack to those films – examining the issues from the perspective of two mothers: Kathleen Quigley (Helen Mirren), whose son Gerard (Aidan Gillen) joins a more seasoned IRA militant, Frank Higgins (David O’Hara), son of Annie (Fionnula Flanagan), in an armed assault on British troops. The two young men are arrested. After refusing to acknowledge the British court’s jurisdiction, Gerard is given a 12 year sentence for shooting a British soldier while Frank is given a sentence of life without the prospect of parole.

Kathleen and Annie are very different. Kathleen, a middle-class teacher, is apolitical but vehemently opposed to violence, while the earthier Annie, who has already lost one son in the Troubles, is already a committed supporter of the Provisional IRA. They are thrown together visiting their sons in The Maze. Their boys start off refusing to wear the prison uniform, then join the dirty protest, and then escalate to hunger strikes. A bond between the two women develops.

Gerard shares a cell with Bobby Sands (John Lynch, looking very Christ-like) until just prior to Sands’ election to the British Parliament. We follow Kathleen’s journey from a mother who is aghast at her son’s involvement in such acts of violence, to her hope for a political compromise to be negotiated by the Church, Sinn Féin and the Government, to her growing support for Sands and the Republican cause, to her utter despair at her son, and others, starving themselves to death. Ultimately, both she and Annie must decide whether they intervene and order the resuscitation of their sons as they lapse into unconsciousness, or whether they allow their boys to die as the martyrs they seek to be.

It is a solid movie that focuses much less on the prisoners’ conditions and struggles, and more on the impact of those struggles on their families and the community. In doing so it hands us a different paradigm – not a simplistic one of the Republicans v British Government / Prison Service (as the other movies tend to), but one consisting of a much more complex jumble of well-meaning and not-so-well-meaning individuals in Government, the Church, the Prison and Sinn Féin. Well, that’s not entirely true; the young Thatcherite ideologue, Farnsworth (Tom Hollander), is portrayed as the most loathsome, two-dimensional face of the new Government.

It’s fortunate in one sense that the film concentrates predominantly on the mothers’ suffering, friendship and ultimate dilemma – as the prison scenes are nowhere near as interesting; the prisoners are uniformly grey and characterless, the prison itself looks as if it might be part of a set made out of cardboard, and the prison officers are (interestingly) almost completely absent and irrelevant. One doesn’t even get a real sense of the putridness of the dirty protest. As I said, it takes a very different tack to that taken by those films which came after it.