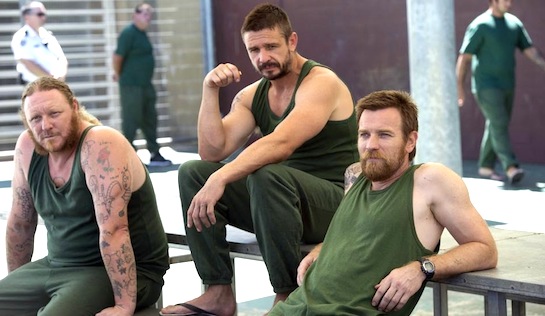 Sadly, this is a crime thriller, not a prison movie. It’s also a movie about strategy, but not as much as its laboured chess metaphor would want you to believe. It’s more of an old fashioned shoot ’em up heist movie, with liberal doses of intrigue and black humour, and a master-apprentice theme.

The story begins by tracking a 19-year-old, chess-playing first-timer, JR (Brenton Thwaites), serving 6 months inside for a crime that is never revealed. For a prison novice he shows a bit of dash, preparing to take on some jail heavies who have been bullying and sexually assaulting his vulnerable cellmate. After counselling him not to get involved, the prison’s notorious chess-playing big-time criminal, Brendan Lynch (Ewan McGregor), comes to his rescue – in return for which he wants a little help, himself.

That little help is in the form of breaking him out of jail. When JR’s 6 month stint is up, Lynch’s connections on the outside put him up in a flash apartment and supply him with guns and money. In due course he is also given his instructions to commandeer a helicopter during a joy flight and pluck Lynch and two of his mates, Merv (Eddie Bono) and Sterlo (Matt Nable) out of a prison exercise yard – in a manner reminiscent of the escape of John Killick from New South Wales’ Silverwater Prison in 1999.

The escape is successful, and luckily the Police seem not to have made the connection between Lynch and a chess-playing Russian crime boss, Sam (Jacek Koman), who is bankrolling the whole affair; if they’re hunting for the three dangerous escapees, you wouldn’t know it.

For JR, a kid with a pretty rugged upbringing, it is an introduction to a totally alien world; money, free booze, girls, the high life… including Sam and Sam’s beautiful young plaything, Tasha (Alicia Vikander). In this world he is a teenager out of his depth, but cautiously willing to learn. Sam takes no time to convince the newly-at-large Lynch to pull off one more job: a risky gold heist at a Kalgoorlie mine that will deliver millions to the gang.

The heist doesn’t go entirely to plan, and there are crosses and double crosses and tensions and tests of loyalty involving members of the gang and between Lynch and JR, some of which relate to JR’s dangerous and boyish infatuation with Tasha. It’s clear that this is where everyone’s chess-honed strategising skills are required to come to the fore, and some do.

The film’s early prison scenes are filmed in Western Australia’s chess-friendly Casuarina Prison and are pretty traditional in a dog-eat-dog, survival-of-the-fittest way. As the film moves away from the prison, the story gets a little more Ocean’s Eleven and a little less credible; particularly when the big guns (literally) come out. Having said that, JR’s prowess at chess, which first brings him to Lynch’s attention in prison, is possibly as fanciful as anything else in the film.

It is an entertaining romp, nonetheless.