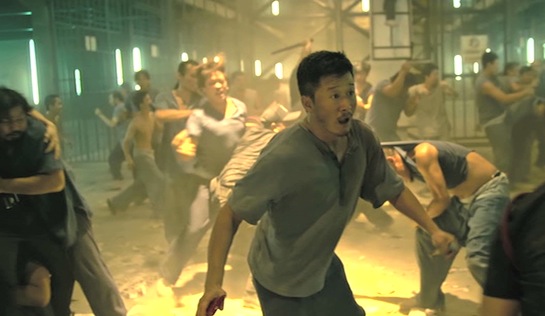 Why is it that I have less difficulty with an absurd action flick out of Hong Kong – replete with series of extraordinary coincidences, implausible plot twists, and heroes and villains alike being shot, stabbed and pounded to little or no effect – than a similarly ludicrous movie out of Hollywood? I have no idea.

‘SPL’ apparently stands for Sha Po Lang, three words derived from Chinese astrology – each representing, we’re told, a star that is capable of good or evil, depending on its position in the heavens. There are a couple of characters in this film who might be capable of both good and evil, but reassuringly most are either clear-cut goodies (with some flaws, admittedly) or out-and-out baddies. While I haven’t seen the original SPL [SPL: Kill Zone (2005)], it seems that this sequel bears absolutely no relationship to it, which is also helpful.

SPL2 focuses on a large, well-established organ trafficking racket. People are kidnapped in Hong Kong and sent to (and then butchered in) Thailand, where there is a ready supply of people awaiting their ‘donated’ organs. Curiously, the dastardly head of the cartel, Hung Man Kong (Zhang Jin), is himself in need of a heart transplant, but because of the extreme rarity of his blood type the only match for him is his brother, the worthy Hung Man Biu… whose healthy heart the callous crime boss covets.

On the organ syndicate’s trail is undercover cop Chan Chi-Kit (Jing Wu), who is so deep undercover he has developed a nasty cocaine addiction. When his cover is blown at a botched exercise at a cruise ship terminal at which the gangsters have set up Hung Man Biu to be sacrificed for his brother’s sake – but not counted on scores of police also being there (and at which the ensuing, lengthy gunfight seems to result in remarkably few casualties of police, gangsters or civilians) – Mr Hung’s men capture the cop Kit and ship him to the North Khlong Prem Prison, Bangkok, whose warden, Ko Hung (Zhang Jin), is part of Mr Hung’s team and detains the kidnapped ‘donors’ until surgery can be arranged. It is of little surprise that prisoners do not rush to Kit’s aid when he yells, “I am Police! Who can help me?” in the yard; it is somewhat more surprising that they don’t lynch him on the spot.

As luck would have it, one of the decent Thai prison guards, Catchai (or just ‘Chai’, Tony Jaa), has an 8-year-old daughter, Sa (Unda Kunteera Yhordchanng), who has leukaemia and is awaiting contact from the sole identified match for a bone marrow transplant – who happens to be the same drug-addled cop held illegally by the crooked warden in her father’s prison. Oh dear. But they don’t know it’s him, and he doesn’t know they are trying to track him down because the baddies have tossed his phone into the Hong Kong Harbour.

Anyway, an exchange is sought – undercover cop held in the Thai prison, for heart-rich crime boss’s brother who is under guard in hospital after being shot at the cruise terminal. Leading the Police response is Chan Kwok-Wah (Simon Yam), who happens to be not only Kit’s supervisor, but his uncle as well – and who will go to any lengths to save his nephew. But even though he is going cold turkey Kit is not a sit-back-and see-how-it-turns-out sort of guy; he breaks out of his cell, gets a guard’s cell phone, rings uncle Wah and starts a huge riot after opening all the cell doors – prompting an extravagantly choreographed martial arts all-in (made more absurd by guards carrying traditional riot control weaponry which they choose not to employ).

At the forefront of the riot quelling is the warden himself – one of the more remarkable prison movie wardens. Ko is young, cool, impassive, and always impeccably dressed. He is clearly not a hands-off warden; unarmed, he cuts a swathe through rioting, skirmishing prisoners with some amazing kung fu acrobatics.

As soon as the Hong Kong police are able to trace Kit’s call to the Bangkok jail, Wah and his colleagues start a rescue mission. It gets messy… but provides plenty of opportunities to showcase ruthless, organ-harvesting baddies (with guns, throwing knives, skewers, shivs and other assorted weapons) fighting against outnumbered good guys (who are much more reliant on sheer martial artistry). And we are regularly reminded that, at the end of it all, there is a desperately sick 8-year-old girl who needs to make contact with the one person who can make her well again.

The plot is ridiculous but entertaining. The prison scenes are filled with violence of the sort where all the protagonists rebound instantly from repeated kicks to the head and return to the fray. Yet it’s in prison that most of the more complex characters are found – the flawed Kit, of course, and the guards who follow orders in support of Ko’s detention of innocent (and doomed) kidnap victims, but when pressed, act more honourably. Pity that it takes an undercover cop and a sick girl for them to see the ethical problems in jailing and killing innocent people for their organs.

But putting all that aside, the dapper, kung fu-ing Warden Ko is well worth a look on his own.