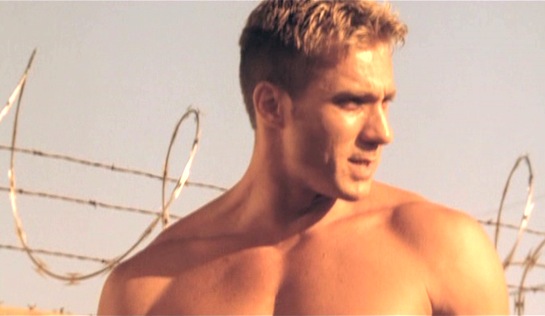 “The most exciting breakout movie of all time,” the DVD blurb claims. Well, not quite.

Spoiler kept reminding me of other movies – such as The Escapist (2002), The King of the Jail Breakers (2009) and Lockout (2012) – and it took me a while to realise that all of those films came after this one. But there are also some hints of Timelock (1996) and others have been reminded of Demolition Man (1993), which I haven’t seen. In any event, it feels derivative, even if that might be unfair.

It’s set a bit into the future – long enough for tobacco to have been outlawed for 50 years, long enough for flying cars (spacecars?) to be the standard mode of transport, but not long enough for clothes, weapons, buildings and prisons to have changed much at all.

The ‘spoiler’ (late 21st Century slang for escaper, it seems) of the title is Roger Mason (English kick-boxer Gary Daniels). Mason claims to have been an innocent bystander when an armed robbery occurred. The court nonetheless found him to have been involved, somehow – through not very – and he was given a 12-month prison sentence… from which he escaped. That’s where we pick up the story. “I just want to see my little girl,” he protests as he is recaptured.

Mason is a master escapist, it seems, though not particularly bright, for whenever he escapes he makes absolutely no attempt to change his appearance (other than maybe to put on a doctor’s coat, or a cassock, or a judge’s robes), and he is always quickly recaptured. After an early escape he is sentenced to 26 years of chemo-ligation: the ‘ice box’. When he is woken up after those 26 years (in great physical nick and clean-shaven, interestingly), he is told that his parents are dead but his treasured daughter, Jillian, is still alive (although now, at 36, about the same age that he looks).

He is still desperate to see his daughter and naturally escapes again, despite all the guards being super-vigilant around him.  For his troubles he is given another 35 years in the ice box, and by the time that has passed Jillian is 72 and he still looks to be in his mid-30s. This time around he refuses a hit of adrenalin when he is reanimated, condemning his joints to fuse if he doesn’t keep them moving.

For lovers of the technical aspects of the art of escaping, not all of his escapes will satisfy. In one, he is simply seen to be outside his secure cell, as if by magic, posing as a fire warden and then conning his way to freedom. In another, he is escorted to the toilet and then, when his guard is briefly distracted, he substitutes a hologram for his real self and it takes a while for the guard to realise that his prisoner has scarpered. (With such strategy and ingenuity, it is a wonder he didn’t think of dyeing his hair or growing a beard while on the run). In another breakout, in which he and four other prisoners escape, his path down a corridor is cleverly blocked by a ‘deep shadow’ – an ‘atmospheric glacier’ – through which they must run, eyes closed and taking no breaths, or face immediate disintegration. Impressive as that sounds, two (out of three) get through it and a securely locked gate would appear likely to be less easily defeated.

Sadly, the tension surrounding the escapes does not make them the ‘most exciting of all time’. What the film itself cannot escape is Daniels’ performance, which moves from leaden to wince-inducing whenever he attempts to show emotion of any sort. He doesn’t even get to show off his fighting skills to any great degree. He is not helped by the production sillinesses. He jumps into a spacecar, for example, no model of which he can have driven for at least the 61 years he was in chemo-ligation suspension, and doesn’t miss a beat. Following his second last escape, he is captured and viciously beaten to a pulp at the direction of a sadistic police officer who is sick of law enforcers being made to look foolish by his escaping… and yet within hours he has only a couple of cuts and minor bruising on his face as reminders.

You hope that a film in which the most shocking punishment is not the death penalty but living to see your children grow old ahead of you, might also be different enough to avoid a schmalzy ending. No such luck here. 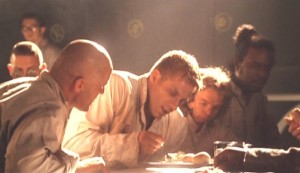 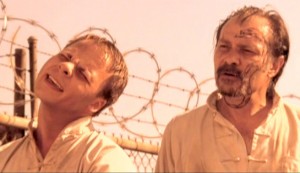