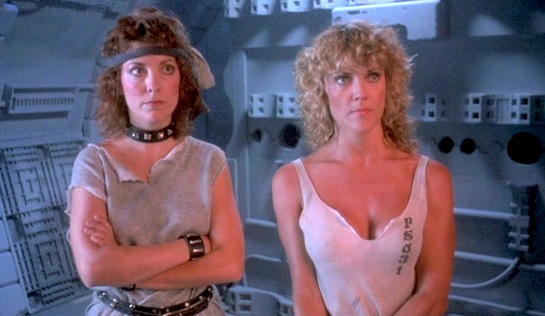 You have to feel for the prison ship’s newest prisoner, Taura (Sandy Brooke). Not only is she (vaguely) innocent, but she has to wear a different, more revealing uniform to every other prisoner and sport a horrible ’80s perm. Mind you, she’s not on her Pat Malone on that last count.

Pre-prison, Taura is a miner of crystals on the planet Arous. A bullying Magistrate, Bantor (Ross Hagen), and his men steal her crystals and eliminate several members of her peace-loving community, including a Taoist priest. In hand-to-hand combat with Bantor (having already killed two of his men with what seems to be a labrys stolen from a children’s dress-ups box), she forces his hand into an acid-and-crystals-filled mini-crater. His hand dissolves. She is found guilty of the murder of the Taoist priest and the two troopers she killed in self-defence, and sentenced to the prison ship Vehemence, in chains, for seven years (or death, whichever comes first).

The good news on her arrival there is that someone has forgotten about the sentence and no-one is in chains. The not so good news is that while she is temporarily tethered all the other prisoners line up to taunt or assault her. And also that the prison is run by a nasty alliance of the one-eyed head trusty, Muffin (Dawn Wildsmith) and Warden Exene (Maya Gant), who mostly appears as a small head atop a giant leather-bound cleavage.

Inevitably, Taura also has to face off against Mike (Suzy Stokey), the prison’s top dog. They hate each other until, after a fight where both refuse to rat on the other, they naturally become best mates. They are placed in stocks and are spanked together, fight against a hideous multi-toothed monster (borrowed from some other movie, apparently) together, get thrown into cages together (although only Taura gets attacked by a sharp-toothed jagger rat), and lead a revolt and escape together.

It’s camp. It’s equal parts spoof and B horror sci-fi schlock, borrowing footage and props from other schlocky movies. It would like to be ironically witty, one suspects. “How do you like it here in the can?” asks the grudgeful Bantor, who arrives on the spaceship for a bit of imposed refuge after being a little too erratically enthusiastic in his loyalist activities in support of the galaxy’s monarch.  “How do you like being the can opener?” shoots back Taura. No other dialogue is worth recalling.

It’s an expensive prison operation, seemingly. The entire prison ship would seem to hold just ten prisoners – including the hated trusty, Muffin – plus quite a few staff (some of whom are aliens and others robots) and the occasional freeloader (not just Bantor, but his entourage as well). They save money, however, on material for all the skimpy uniforms (for both prisoners and staff), and by growing their own instruments of torture (the jagger rats, and giant leech-like suckers). Warden Exene, though, has extravagant tastes – mainly leather (whips, bodices) – and she carries an antique PR24 that must be worth a fortune in whatever year the film is set. Other than eating green slop at meal times, it’s not clear what the prisoners do all day.

Those who watch Star Slammer hoping for lots of gratuitous space nudity and intergalactic canoodling will almost certainly be disappointed. Others are just likely to be disappointed. 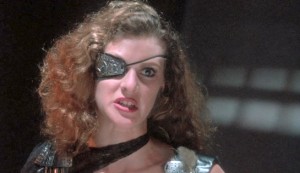 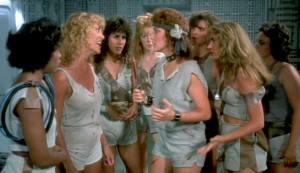 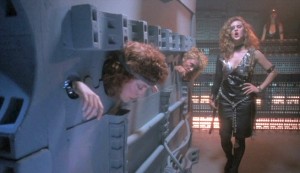 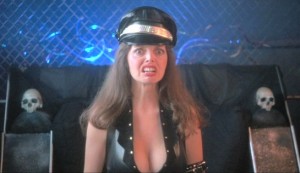