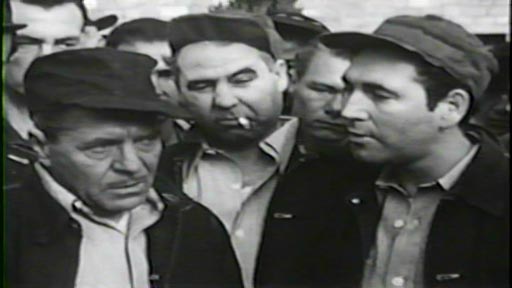 “It was a dreary day when Roger Manners saw the gates of the prison open. Gates that were to close and deprive him of a world of free men. And here he was to become familiar with the clang of pails against steel doors, the smell of disinfectant in the cell blocks, and mark the time of night by the cries of the watchmen calling the hours.” So narrates the actor Warden of the Nevada State Penitentiary  in Carson City, where the film was shot. Sententious rubbish, really.

Manners (Warner Baxter) is an aeronautical engineer who has been convicted of embezzling $400,000. He cops 3 to 5. But he also maintains his innocence, earning the scorn of his fellow prisoners and the wrath of the Attorney-General, whose staff still pursue him in the hope of recovering the money.

Although he’s an older man, the other cons pay him little respect; they all want a piece of the loot. He gets knocked about a bit, and doesn’t help his own cause when he disarms a mentally-ill prisoner who had just tripped up a guard and taken his rifle as the guard was hurrying to break up an all-in brawl in the yard. Manners is also seen to be too-regularly chatting to the Warden, who seems to have an odd personal investment in the Attorney-General retrieving the insurance company’s money, and earns a reputation as a stoolie.

His engineering skills are in demand – by both the prison (which is trying to install a new water system) and the prisoners, who are hopeful of escaping through the massive water pipes that carry the water from the local river. He secures a job in the valve house, regulating the water flow through the pipes, and is prevailed upon to turn the water off so that some prisoners can make a break for it. Guards intervene and turn the water back on; three cons are forced to abandon their escape bid and another one drowns. Manners is held responsible, is beaten and has his elbow broken. Soon after, he’s back in everyone’s midst, in a wheelchair, as if nothing much has happened.

But his real drama is in proving his innocence. Without warning, his wife, Shirley (Karin Booth) heads off to Florida to meet up with his old business partner, Stan Brown (Robert Shayne), whom she suspects is the real embezzler. It might be a bit odd that she didn’t tell her husband what she intended to do – but then they have a single monthly visit which is cut off after just 1 minute 29 seconds, so there are limits to what can be shared. Shirley flirts outrageously with Stan and soon the newspapers are (intriguingly) carrying stories of their intentions to marry once her divorce comes through. Slow news days, obviously. Manners sees these, escapes to find out what’s going on, and is duly captured in Florida. He and his arresting officer drop in on Stan and Shirley just as Stan is pocketing a big wad of cash and Shirley is pointing a gun at him, saying that she “need(s) that money to clear Roger.” All conveniently sorted.

The film notes that it is the first time that cameras had been allowed inside the penitentiary in Carson City. For the film’s producers, the quid pro quo was clearly to allow some of the Nevada prison’s key messages to be broadcast: it’s appropriately tough, but there is industry and order, and (extraordinarily) “most (prisoners) in fact will profit by (their time inside) and emerge from here as better men.”

Some, they concede, will not, and will spend a lot of grey days inside; grey walls, grey clothes, grey men, grey prospects. You wonder how anyone will emerge a better man when the narrator, no doubt trying to deter youngsters from lives of crime, describes Manners joining a line of prisoners “marching aimlessly, mechanically down the same corridors, up the same steps toward a day ahead that would be just like any other day. March, march, march. Always in prison file. Always being watched. Always being counted. The same routine. The same faces. The same hopelessness. The same futility. Nothing to look forward to except a tomorrow that would be no different from today… Another day in the City of Lost Men.” It is the salutary type of futility, obviously.

At just 66 minutes long, it doesn’t allow itself to be too distracted by sub-plots or character development or (outside the documentary-style, narrated descriptions of the features of prison life and a few cliched scenarios), a sense of what anyone’s experience of prison might really be like. Very ’50s. 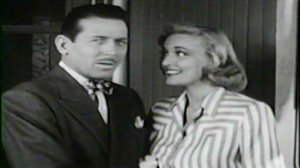 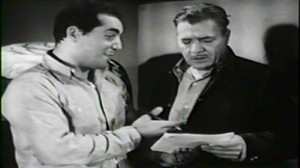