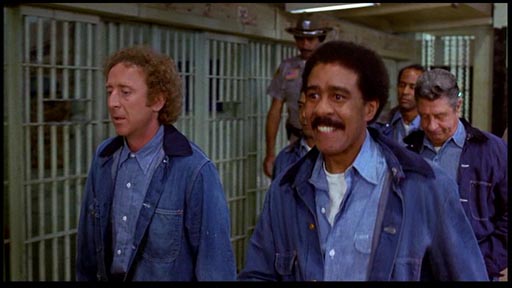 Skip (Gene Wilder) and Harry (Richard Pryor) are two down-on-their-luck New Yorkers who head off for the west coast. They stop off in a small town and make some money by performing as woodpeckers in a bank promotion, only for two armed robbers to promptly hold up the bank in the same woodpecker outfits and make a getaway in their van.  Naturally Skip and Harry get convicted of the robbery and are sent to prison for 100+ years.

They’re both hugely out of their depth, particularly Skip who persists in treating the prison as a workplace cooperative. But for a city boy who has never ridden a bull he shows great aptitude for the sport, and is selected to be the rider who will allow the warden to win back huge amounts of money from a rival prison warden at the annual rodeo (attended by thousands of cheering fans who understandably turn up to watch two prisons go head-to-head – not unlike The (second) Longest Yard’s gridiron contest). Skip’s crew decide to escape during the rodeo. Despite some funny moments, it’s all pretty predictable. The prison guards are stony faced or scheming (although remarkably tolerant of some of Skip’s antics – eg jumping on one guard’s back), and Skip and Harry’s new friends include a pacified mass-murdering monster and a drag queen.

Everything turns out sunnily; the intricate escape plan goes well, the romantic sub-plot ends happily… and no-one needs to care one iota that there are convicted murderers and armed robbers on the loose. 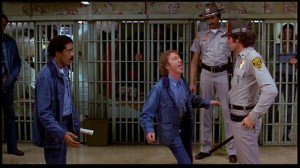