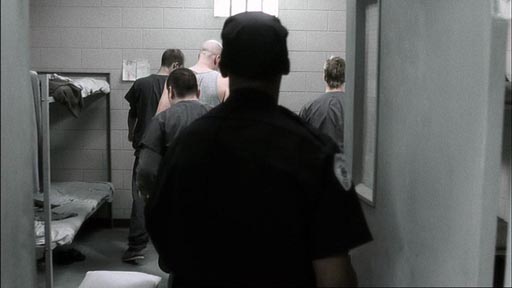 Set entirely in a spartan four-man cell, this could be voted Least Uplifting Film of 2009.  It’s apparently based on real events at a German juvenile detention centre in Siegburg, near Bonn, in 2006, where three inmates tortured, raped and then hanged a fourth. That doesn’t make it any easier to watch.

I shall spare you the need to watch it yourself. There are four grey-clad prisoners confined to their grey cell for 23 hours a day. Mitch (Shaun Sipos) cleans up in the poker game, and then is reluctant to lend any cigarettes back to the others who had lost everything. This riles them just a tad. He then proposes that the loser of the next game eat a whole tube of toothpaste. Of course he loses and stupidly reneges on his own deal. The others attack him, force him to eat the toothpaste, and then perpetuate a series of nastier and nastier atrocities on him.

It’s grim. They bully him into drinking a concoction which he promptly throws up. Peter (Sam Levinson) forces him to eat his vomit. He hits the cell intercom; an even worse offence. They beat him, kick him, force his head into the toilet. As the violence escalates Jack (Steffen Mennekes) rapes his prone body and Harry (Edward Furlong) rapes him with a broomstick. Ultimately they decide to hang him, and make it look like suicide, rather than have him found bloodied, semi-conscious and able to put them all in. Peter, the most troubled by the violence, brings upon himself the threat of similar treatment by suggesting that things had got ‘out of hand’. The others see him as distancing himself from the collective torture, and make sure that he is well and truly implicated in the hanging.

The only saving grace of the movie is to see it as a sort of prison-bound Lord of the Flies. The DVD’s blurb speaks of ‘a distressing tale of hard men trapped in an even harder place’, but the whole point of the movie is surely make one squirm at the barbarous acts of which quite ordinary men are capable. If not, it becomes simply a film for voyeurs of torture, degradation and utter humiliation; an unpalatable prospect.

In to-camera pieces with an unseen interviewer, each of the survivors provides his excuses and attempts to deflect responsibility. Peter speaks of the hierarchy in prison, and suggests that he only took part to ensure that they didn’t turn their attention to him, the next weakest. Edward Furlong, the boyish victim in Animal Factory (2000), here plays the most cynical, most unapologetic of the tormentors. Jack claims regret that he didn’t step in and stop the hanging. They implicate each other. They blame the system.

It’s bleak and harrowing. It’s disturbing. It’s an uncomfortable portrait of how easily men’s need to assert power and superiority can get out of hand. But one suspects it takes a bit too much pleasure in its depiction of the gruesomeness. Avoid it if you can.