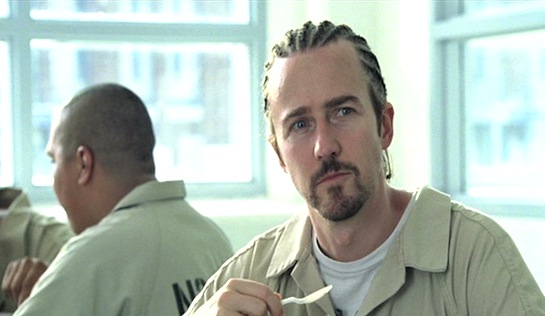 It can be difficult when the three main characters in a movie are all morally reprehensible, but here it’s part of the attraction. There are demons on both sides of the prison wall, parallels in the lack of willingness to wrestle with them, and plenty of moral ambiguity.

One of those whom it is easy to dislike is Gerald ‘Stone’ Creeson (Edward Norton) – a fast-talking con who has served 8 years of 10 to 15 for his role in setting fire to his grandparents’ home. With his dead grandparents in it. He wasn’t found guilty of killing the couple, and bears pretty much no guilt for being part of the enterprise in which they were killed by his accomplices. He stridently asserts that he has paid his debt to society in full, and that he has no less moral right to be free than his parole officer, Jack Mabry (Robert De Niro).

Sheer psychopathy, of course, deserving of our outrage on behalf of the veteran parole officer. And he’d get it, too, were it not for our knowledge that decades earlier, Jack, now within sight of his retirement, had blackmailed his wife into not leaving him by threatening to throw their young child out a window unless she stayed. So she did.

Stone’s cut and thrust is a fine example of the sort of time-honoured mind-game played by inmates with correctional staff for as long as there have been prisons and prisoners: the task is to find a crack in the officer’s make-up, and exploit it. At the same time we know that Jack has dealt with hundreds of insincere, remorseless, manipulative prisoners in the past and that he is there to protect the interests of the community; we rely on him to see through prisoners and to help keep the dangerous, unworthy ones – like Stone appears to be – inside. But Jack’s past is impossible to ignore; if this is to be a psychological battle, with which of the protagonists – both of whom have murky, repressed pasts – do we side?

Stone tries not to leave too much about the parole decision to chance. He enlists the support of his beautiful wife, Lucetta (Millo Jovovich), a woman not overly bound by moral constraints, particularly as they relate to matters of sex. She gets her orders and dutifully pursues Jack; supplicating, flirting, imploring, teasing.

While this is going on, Stone embarks on his own improbable spiritual journey, having been challenged by Jack to define what he means when he says he has become ‘reborn’ in prison. He embraces Zukangor, a (fictional) path to enlightenment, and pursues it with a fervour that contrasts markedly with Jack’s shrivelled up Christian practice.

The question of whether Jack will succumb to Lucetta’s charms becomes the film’s focal point: can he resist the carnal temptation – which he knows is one part bribe, one part blackmail – and find redemption, or add a compromised career to a sham marriage and a hollow faith?

There are terrific performances by De Niro, Norton, Jovovich and Frances Conroy as Jack’s pious, cheated wife. They overcome annoyances such as the Christian talkback radio that serves as a unsubtle backdrop to too much of the action, Stone’s try-hard corn-rows, and the constant suspicion that Lucetta would not have stayed with him for eight years, or hooked up with him in the first place. The battles on many fronts make it worthwhile. 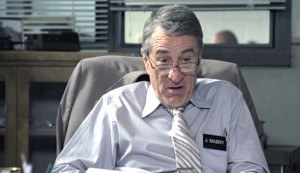 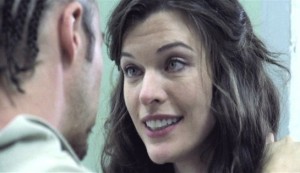