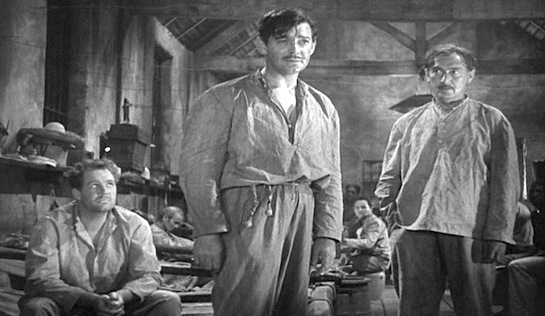 Aah! The delight of two movies in one… tempered only by one of them being rather drawn out, and the other a little weird.

The first is captured nicely by its Italian title, L’Isola del Diavolo (‘Devil’s Island’) and its Swedish title, Flykt (simply, ‘escape’); a mostly standard escape-from-a-French-Guianan-penal-colony movie, albeit with a woman civilian in tow. The second explores a more supernatural, spiritual theme, with one of the escaping prisoners being a Christ figure who brings salvation to all (or nearly all) of his fellow prisoners, mostly just before they die.

At the centre of the first is Clark Gable’s charismatic thief Verne, who – due principally to five attempts to escape from the penal colony in the past three years – has endured 90 lashes, 16 months in solitary and 7 months in the fabled bear pit (a concrete pit covered by a steel grate that left the prisoner exposed to the elements at all times, disappointingly not a feature of this film). Verne’s sixth escape attempt starts with him dropping off from a group of 36 prisoners returning from work. The guards count 35, but before the alarm can be raised, a mysterious character, Cambreau (Ian Hunter), catches up to the others to make it 36.

Verne has snuck over to the local bar (out of bounds to prisoners, naturally) to see Julie (Joan Crawford), a brassy singer whom he had hoped to be able to charm sufficiently to help him escape. But Verne is spotted going into her room by the odious stoolie Monsieur Pig (Peter Lorre), who alerts the authorities. Julie quickly directs the guards to her room and Verne is apprehended – but when Grideau, the commandant, interviews them both he somehow finds that she has done the wrong thing and expels her from the island, giving her just 12 hours to get to the mainland. Verne, on the other hand, receives no further punishment but is allowed to return to his dormitory (how does that happen?), where the mysterious, Bible-quoting Cambreau spookily seems to know everybody yet no-one can quite place him.

Soon Verne stumbles upon an escape being planned by an old foe, Moll (Albert Dekker), and demands to be included. Cambreau fortunately stumps up the cash for both of them to get in on the act. Although Moll tries to dissuade Verne from joining in (by whacking him with a shoe while he is asleep), Verne finds a map of the escapers’ path through the jungle in a little Bible Cambreau has left for him… and heads off in pursuit, stopping only to rescue Julie on the way. In all, seven prisoners survive the jungle and make it, exhausted, to the beach: the violent Moll, serial wife-poisoner Hessler (Paul Lukas), the devout Telez (Eduardo Ciannelli) whom Dufond (John Arledge) and Flaubert (J Edward Bromberg) try to kill for his food, Verne, Cambreau… and Julie.

While Verne soon wrests charge of the group from Moll, Cambreau is already looking a lot like The Man. He knows which way to go when everyone is is lost. He is dependable, calm, wise, and a natural leader. When he leaves the party and says he’ll be back, you know he’ll be back. When they board the sloop that has been left for them and head for the mainland, he has a quiet certainty that they will become becalmed, and that they can get through it. His judgement is spookily infallible.

Some of the men fall by the wayside. But before they do, Cambreau edges each of them towards repentance and redemption; those who die, die better men than they were in life, and those who live, live better lives. Except for the decidedly unrepentant Hessler, who says to Cambreau, “I hope you’ll have better luck with Verne than you had with me. You know, of course, that your chances to herd me into your little flock were limited, because I am not exactly sheeplike. And you deal mostly in sheep, don’t you, Cambreau? Well, perhaps you and I will meet again.” “No, Hessler,” says Cambreau, emphatically, portentously and God-likely. “I’m afraid we two will never meet again.”

There’s something about many of these Devil’s Island films, most notably Papillon (1973), that makes them rate highly on the tedium scale – despite the exotic location and stories that should be dramatic and thrilling. Gable and Crawford are, however, both excellent and they keep Strange Cargo from drowning completely in its own shark-infested weightiness, but it’s still hard to know what to make of a prisoner who is the embodiment of Christ (goodness, he even winds up with a fisherman!) escaping and drifting about with a group of ne’er-do-wells… other than that Christ drifted about with a group of ne’er-do-wells.

It didn’t help, either, that odd-cargo Cambreau kept reminding me of David Ogden Stiers’ Major Charles Emerson Winchester III from M*A*S*H – or that he is altogether a little too even, a little too good, and a lot too unlike a prisoner to warrant his place on the team. Still, you might find the film worth watching for Gable and Crawford alone. 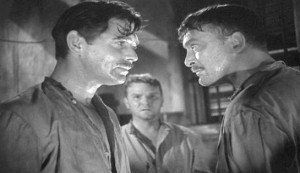 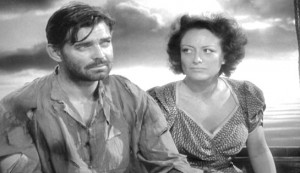 Thanks to Bryan for pointing me in Strange Cargo’s direction… notwithstanding its strange insufficiency of prison.