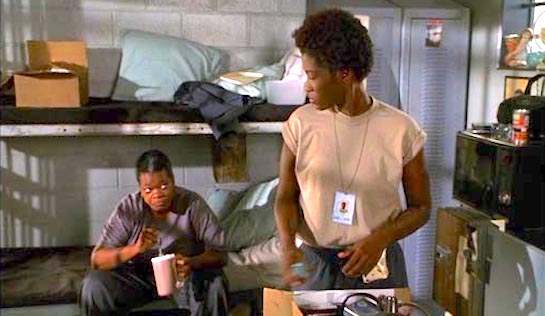 A made-for-TV women’s prison movie that tells a sad, bleak tale, with a certain grittiness to match.

Treasure Lee is a tough, battle-ready African American teenager who engineers her transfer from a juvenile facility to adult prison to get close to her mother, a lifer whom she has never met. Her mother, Brownie, is a fearsome and feared woman. She has surrounded herself with a non-biological ‘family’ who, amongst other things, help her run drugs and other rackets. Her survival and position of power are based around a ruthlessness, an affinity with violence – and a lucrative partnership with a corrupt guard. Treasure, desperate to belong, fits right in. She has attitude. After a bit of a false start, mother and daughter get on just fine – Treasure supplanting the other ‘family’ members, much to their chagrin, and at the same time alienating herself from her best mate from juvenile prison. Treasure’s neediness for recognition from her mother acts as a counterpoint to her assertive taking of everything else as if it’s her birthright – whether that be the role of Brownie’s right hand person, or another prisoner’s lover. It all comes to a head with a nasty confrontation with the prison’s white supremacist gang; a confrontation from which the white guards pointedly turn and walk away.

Some of the film has a stark realism about it and provides some insightful commentary on prison life, while other scenes appear gratuitously unpleasant and oddly out of place (for example, male staff supervising naked female prisoners on reception, an anxious prisoner being thrown in ‘the hole’ for questioning whether the cavity search apparatus should be used straight from one woman to the next, and prisoners being let into other prisoners’ cells after in the middle of the night to give them a good old tidy up). The ending is unexpected but unrepentant: ‘you do what you have to do to survive.’