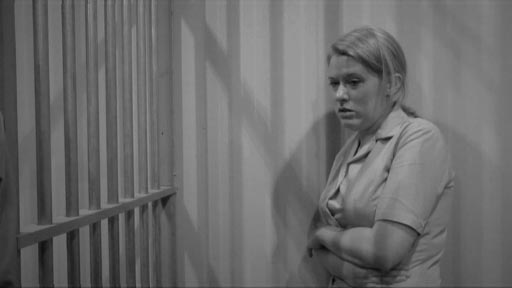 I’d read the reverential, slightly fawning reviews and was looking forward to seeing this arty ‘throwback’ (Steve Balderson’s contemporary tale filmed in the manner of a noirish 50s black-and-whiter) with great anticipation. Sadly, I found that it not only failed to live up to the hype, but is not a patch on the Women in Prison films of the 50s, the style of which it seems to try to recreate. If you like the period, watch Women’s Prison (1955), Girls in Prison (1956) or the British Yield to the Night (1956) instead, is my tip.

It’s a low budget offering. Or, if not, they spent the budget on something other than ensuring high production values. Stuck! is stilted and stagy, its small cast unhappily trapped inside an awful set, and appears to owe more to the campy Prisoner: Cell Block H TV series than to the noir WIP films. The script itself is so far from inspired that it adds to the list of the film’s crippling constraints.

The story revolves around Daisy (Starina Johnson), a hardworking, virginal young woman who cares for her invalid mother and, in failing to prevent her from suiciding finds herself wrongly convicted of her murder. So heinous is this case of matricide, apparently, that she is bumped up the queue and is scheduled to hang before all of her Death Row colleagues, every one of whom preceded her there: Dutch (Pleasant Gehman), a butch prostitute who killed her policeman client (resplendent  in tattoos that update the story from the 1950s feel), Meme (Susan Taylor) who poisoned four husbands, the evangelistic Esther (Mink Stole) who murdered a swarm of federal agents who were trying to arrest her for tax evasion, and the disturbed Princess (Jane Wiedlin) who killed her child and has regressed into a child-dom of her own.

Their world is controlled by a guard (Stacy Cunningham) known as Amazon by the women, and the Warden, whose entire job appears to consist of monitoring CCTV from a darkened office. The guard is nasty in predictable and unimaginative ways: “D’you want me to get your mommy?” she mocks a distraught Daisy, before feigning forgetfulness – “That’s right… you already did.”

After the first attempt at hanging Daisy fails at the end of a broken rope, Daisy is transformed into an assertive, gutsy… different woman. So different is she that soon after after being raped by four masked men as punishment for leading an attack on Amazon, she invites Dutch to engage in a bit of sexual intimacy (the prison equivalent of phone sex) from the adjoining cell. Methinks not.

Throughout all this there is a parallel (and almost wordless) story of Daisy’s next-door-neighbour (Karen Black), who witnessed half the scene in which Daisy’s mother shot herself and whose testimony buried Daisy at court. She has a crisis of confidence in what she saw and the aptness of the penalty… and it’s the neighbour’s battles that save the plot from being wholly derivative. Mind you, we are also spared the prisoner’s legal team frantically seeking a reprieve which usually accompanies Death Row films such as this… and we know why: not even her own team cares what happens to her. 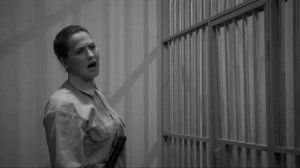 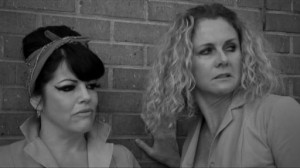