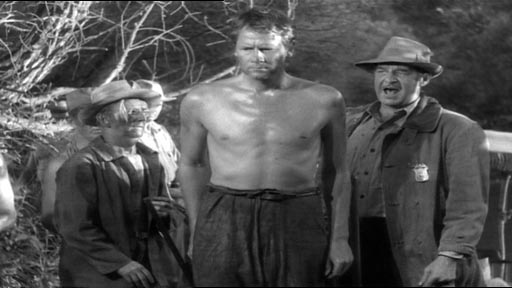 When Preston Sturges’ Sullivan’s Travels was first released, the US Government’s Office of Censorship, not wishing to hand any propagandist advantage to its World War II enemies, declined to approve it for international release on the basis of its “long sequence showing life in a prison chain gang which is most objectionable because of the brutality and inhumanity with which the prisoners are treated.” That ‘long sequence’ runs to just 12 minutes, and in terms of depictions of chain gangs, is well down the brutality scale. What’s more, it’s quite possible that more damaging to the high moral ground occupied by the US was Sturges’ satirical treatment of the Hollywood culture.

John L Sullivan (Joel McCrea) is a Hollywood director of very profitable comedies who wants to do something of serious social import. He is keen to film a protest novel, O Brother, Where Art Thou?, but is acutely conscious of his privileged upbringing and wants to experience what it’s like to be poor and needy in order to give his project a more authentic feel.

Against the advice of his studio, he dresses as a hobo, squirrels away just 10 cents to live on, and sets out to enjoy a life of hardship. He has gone nowhere much when a pretty (and unnamed) girl (Veronica Lake), who is about to give up her quest for Hollywood stardom and return home, shouts him a meal. His resolve to live in penury is short-lived; he grabs his car and gives her a lift. His true identity and mission exposed, she asks to join him on the road. He agrees, but gets ill and is rescued by the anxious studio. When he later attempts to hand out $5 bills to all the homeless people with whom he had been living (a gesture looked upon very favourably by the studio for the terrific publicity it will generate for his yet-to-be-made movie), he gets rolled by a fellow hobo and – disoriented – attacks a railway worker.

Still dazed and confused during his court appearance, he gets 6 years for assault and trespass and ends up at a prison camp, startlingly similar to the one reproduced in Cool Hand Luke. No-one there knows who he is, and his studio has no idea that he is in prison.

Two major things happen in those 12 minutes he’s in prison. He sits through a showing of Disney’s Mickey Mouse and Pluto at a local church, and realises the power of humour to unite people and give relief to those without hope; he abandons his idea of a serious protest movie. And he learns from a newspaper that the world believes him to be dead.. and promptly confesses to his own murder in order to bring his plight to the public’s attention.

It’s a satire to match Gulliver’s Travels. Sully, so critical of the artificiality of Hollywood, is constantly propped up by his studio, can’t exist without the trappings of his success, and ultimately the Hollywood machine even makes the balance of his 6 year sentence disappear, making a mockery of the judicial system. To top it off, during the brief period while Sully was ‘deceased’ his money-hungry wife remarried and will now be forced to grant him a divorce, allowing him to marry The Girl.

The misery of the hordes of homeless people and brutality of the prison camp nicely papered over, it’s a true Hollywood happy ending… and an excellent movie. 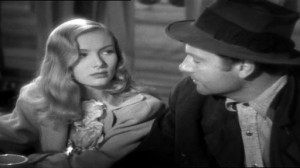 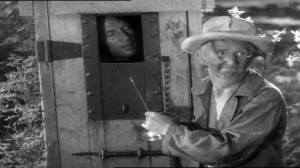