The 2008 ‘kids for cash’ scandal in Pennsylvania’s Luzerne County resulted in two judges, Mark Ciavarella and Michael Conahan, ultimately receiving sentences of 28 and 17½ years respectively for taking kickbacks from for-profit juvenile detention centres (enhanced by giving children unnecessary or excessive sentences to prolong their stays there). Children were branded as delinquents and sent to the centres for as little as mocking an assistant principal on a MySpace page, being found in a vacant building, and cursing another child’s mother, and the case is cited as the inspiration for this movie. None of the affected children, to my knowledge, were champion archers… but there were several thousand victims, so there could well have been champion archers, philatelists, lacrosse players, trichologists and kids whose other skills withered as they endured unnecessary spells in custody.

Lauren Pierce (Bailey Noble) is an archer, and a very good one. After leading her high school team to victory in an archery competition, she intervenes when her friend (and hoped-to-be more-than-a-friend) Emily is abused yet again by her boyfriend. She is charged with aggravated assault of the boy, and although she is a straight A student with no record, a champion bowman and claims that she was acting in self-defence, she is sent to the Paradise Trails girls’ detention centre for an indefinite period… a period that can be extended for each infraction at the centre.

Paradise Trails (tucked away in, or at least filmed in, the San Jacinto mountains) is run by the wardenesque gunnery sergeant Bob Patrice (Bill Sage) who, luck would have it, was an Olympic archer. As a result he takes a special interest in Lauren, but not enough to allow her to call Emily (who she thinks has betrayed her) or home or to get other privileges.

The key staff of the centre eurrrghily all appear to be men; notably Bob and his son Michael (Michael Grant Terry). They have issues: abandonment, misogyny, lechery… you name it. Michael spies on the girls in the shower, and all the staff seem to take delight in unusual punishments – making the girls drag a concrete block behind them, or carry a backpack of horse manure, or eat food that has been spat in. And being whipped, which it turns out is a Patrice family favourite.

During one such punishment, Lauren and the toughest of the other detainees, Rebecca (Jeanine Mason), who has escaped many times and continues to be brought back to Paradise Trails, overpower Michael, tie him up, gag him, and escape. They find Bob’s home and ransack it – taking Cheetos, clothes (which somehow manage to fit them)… oh, and thousands of dollars in cash and a little black book showing all the corrupt payments he has made to judges.

But they dally a little long in the hot shower (director Valerie Weiss has a dilemma here: it’s clearly obligatory to have a shower scene or two in a women’s prison film, but it’s a little awkward when the prisoners are meant to be of school age) and Bob returns and catches them. Oh, my!

Do they escape his clutches? Do they attempt to take his car and flee to the city, or prefer to run away through the wooded mountains on foot? Do they take one of his many firearms, or prefer the bow and arrow? Do they take his firearm from him when they can, or do they prefer a fairer fight, not wishing him to be so disabled? Does Bob fire upon the two girls who hold all the incriminating evidence to send him away for a very long time, or resort to his Olympic archery skills? It is the very stuff of nonsense.

One suspects that there is a good film to be made from the story of kids being dragged into the criminal justice system far more deeply than they should by corrupt judges out to make easy money. This isn’t it. 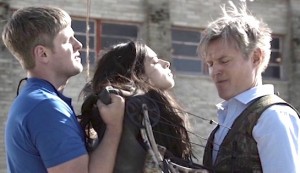 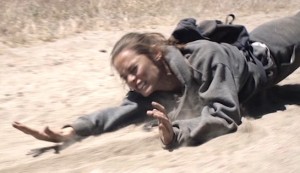 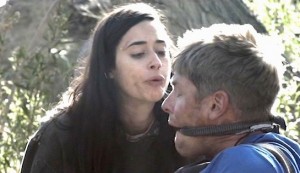 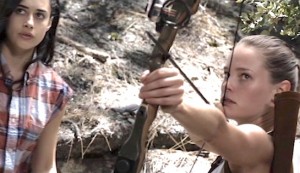