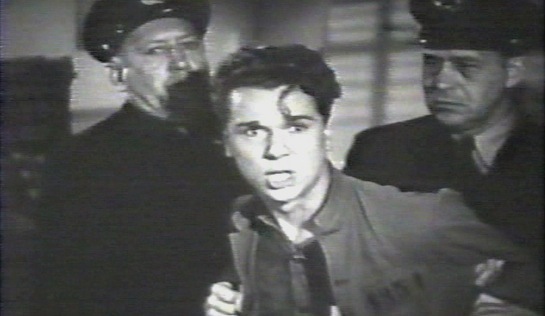 Bill Whitlock (Victor McLaglen) is a loyal Captain of the Yard who has risen to be Acting Warden of a big San Quentinesque prison. But when he is overlooked for that job, he is devastated. He tells his wife that he can’t go back to being Captain of the Yard; his future looks a bit grim.

Meanwhile, a young mechanic, Jimmy Hutchins (Jackie Cooper), has come to live in town, hoping to enrol in college. Jack Lang, a man he has met by chance at his garage, has expressed interest in a new motor he has invented, and promises to put him in touch with a Detroit bigwig as the exec passes through on his way to the airport. It’s an opportunity of a lifetime for Jimmy. He waits on a corner for the Detroit man to stop by, not realizing that he’s there to drive the getaway car for two prison inmates, Chuck Burkhart and Buzz Miller, who arrive at great speed having escaped from Warden Whitlock’s prison. With Whitlock in tow as a hostage.

The escapees and their hostage switch into Jimmy’s truck, which he is forced to drive at gunpoint. It is pursued by a motorcycle cop, who is duly shot by the escapees – just before the truck blows a tyre and crashes down a steep incline. Miller is killed. Night falls almost immediately, and in fading light Whitlock manages to shoot the fleeing Burkhart with a gun he takes from Miller’s dead hand. Whitlock then discovers a bag full of cash that has fallen from Burkhart’s grip, and – his future suddenly looking rosier – decides to keep it.

The unconscious Jimmy is dragged out of the truck and charged with being an accomplice. No one believes his story about the man from Detroit and his invention, and the plans for the motor can’t be found at the scene of the crash. At the trial Lang denies Jimmy’s version of events, and Whitlock claims that he was unconscious and unable to attest to Jimmy being an unwitting participant. Jimmy is found guilty of the policeman’s murder and is sentenced to death.

He feels a little aggrieved. Full of youthful self-righteousness, he refuses to comply with prison rules, reasoning that nothing can be done to him that is worse than wrongly being found guilty of a crime he didn’t commit and landing on Death Row.

Whitlock – who seems to have forced a rethink on his suitability as Warden by his heroic shooting of Burkhart in the back – feels a teensy bit guilty about having Jimmy wrongly convicted, but still expects him to be released on appeal. Oops; Jimmy is denied an appeal. And then when Whitlock finds Jimmy’s plans for his motor in the bag of loot – and realizes that he possesses the only evidence that can exonerate him – his dilemma increases.

Lang visits Jimmy in jail and callously offers to arrange his escape if Jimmy leads him to the missing money. What missing money? By a process of elimination, Jimmy works out that Whitlock must have the money – and his plans – and confronts him. Whitlock denies all, and bans all of Jimmy’s visits. But the escape is all fixed anyway, with Dippy (Edward Brophy), an audaciously impertinent trustee assigned to the warden’s household who has worked out his boss’s complicity in the whole affair, muscling in on the break.

The strain of his moral dilemma starts to take its toll on Whitlock; to tell the truth means he goes to jail himself, but to keep quiet will see an innocent man hang. He becomes increasingly disheveled, starts drinking in his office, and then decides to go to Jimmy’s lawyer and sign an affidavit clearing Jimmy – on the condition that he be given five days head start to clear out before it is made public.

Jimmy and Dippy make their break. Lang has a car waiting, but is shot dead and is dumped. Jimmy wants to go directly to his lawyer; Dippy wants to be far away in another direction. They are pursued not only by police but, oddly, Whitlock and his wife and Jimmy’s lawyer – straight from the affidavit signing. You might think that Whitlock, too, might head off in another direction, but no, he has one last, decent, redemptive act in him. As night suddenly falls again, he confronts (unarmed) a holed-up, armed-up, dandered-up Dippy… and comes off second best. His affidavit, however, is enough to clear Jimmy who passes up big money to tell his story in order to be just an ordinary student at college.

This isn’t a great prison movie, but it features one of the great characters – the impudent Dippy (so much more interesting that the understandably petulant Jimmy – and the British McLaglen, whom we are asked to believe is a 25-year veteran at the penitentiary). And it makes a nice change from all the corrupt wardens in films who abuse their power for personal gain; here is a good warden, albeit an embittered one, who sees a rare opportunity for a comfortable life – a just reward for many loyal years of toil – and greedily succumbs to temptation. 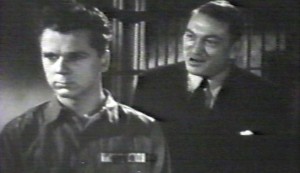 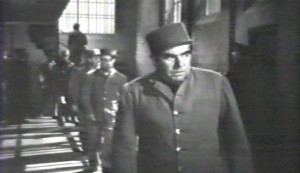 The Big Guy was also known as Warden of the Big House and was later remade as Behind the High Wall (1956).