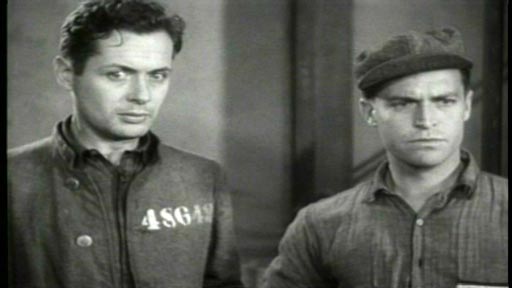 Consistently referred to as the daddy, the granddaddy, and even the great-granddaddy of all prison movies. You get the picture. And it’s reputation is deserved… many of the classic prison scenes that we now associate with the genre are packed into this one drama – a new fish, some hardened cons, a practical, fair-minded Warden trying to maintain discipline in his grossly overcrowded prison, a stool pigeon, a love story, a great mess hall scene, an exercise yard teeming with prisoners, escapes, smuggled guns.. You name it, it’s in there.

Kent Marlowe (Robert Montgomery) is newly received into prison, serving ten years for a drink-driving manslaughter. There’s something immediately unlikeable about him – we sense that he’s privileged, unwilling to accept responsibility and gormless – but we stay with him because he’s scared and clearly out of place in prison. To top it off, he gets thrown to the wolves  – in a cell with two hardened cons, the rough’n’tumble ‘Machine-Gun’ Butch Schmidt (Wallace Beery) and fraudster John Morgan (Chester Morris). Butch is the brawn and Morgan the brains, and they are inseparable despite hoodwinking each other or having minor fallings out every second minute.

Marlowe is an easy target at first and is taken for a ride or two by more experienced inmates. A stoolie senses his isolation and encourages him to inform on his cellmates in order to get a reduction in his sentence, and proposition Marlowe digests a bit too eagerly. Our suspicions about his shiftiness and spinelessness are confirmed when he disposes of a knife (ditched by Butch) in Morgan’s jacket just prior to a search, resulting in Morgan’s scheduled release on parole the next day being cancelled. Marlowe admits to nothing as Morgan is taken away, threatening revenge, to the punishment cells.

Morgan comes out of his time in The Hole feigning complete collapse, and in a jiffy manages to escape from the infirmary in a mortuary truck. On the loose, he tracks down Marlowe’s pretty sister, Anne, whom he had seen on a visit. It seems that his intention was to pay her back for her brother setting him up, but she covers for him when a suspicious Detective arrives on the scene – not wanting to have him sent back to ‘that place’ – and an unlikely romance blossoms.

By this stage we’ve shifted our sympathies to Morgan. He’s charming, good looking, scrubs up well, and seems to be genuine in his desire to start his life afresh. But then he gets caught and sent back to jail, where Butch is planning an audacious escape through the front gate. Morgan, with a new commitment to law-abidingness, declines an invitation to join them. Stupidly, Butch’s crew has included Marlowe in the plans, and consequently it’s no surprise that staff are ready to fire on them when they burst through the gate.

It’s climactic, that’s for sure. Some critics regard the final 20 minutes, when the prisoners supplement the guns they have smuggled in with machine guns from the armoury and take staff hostages, and then the Warden calls in Army tanks, as tense and rivetting. I must admit, it’s the very point where the film lost me. If it weren’t for a further opportunity for Butch and Morgan to fall out again (Butch believing that Morgan had snitched), shoot each other and then make up, the final shootout scene would have been a complete waste of time. And then it all ends rather-too-happily for Morgan, who gets pardoned for preventing even more bloodshed and he is released into Anne’s arms to start a new life.

But the film as a whole is very solid. Montgomery’s Marlowe has a wonderful wateriness borne principally out of fear. Beery’s characterisation of Butch as a fabulously excitable, cartoonish tough guy earned the the actor an Oscar nomination. Morris’s Morgan might just be the most charismatic movie prisoner before Paul Newman’s Cool Hand Luke. And the interaction between staff and prisoners and prisoners and prisoners seems uniformly authentic and credible.

Eighty-odd years on, it still holds up pretty well. 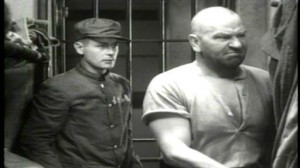 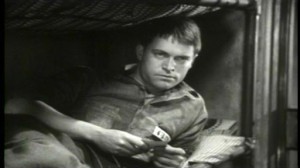