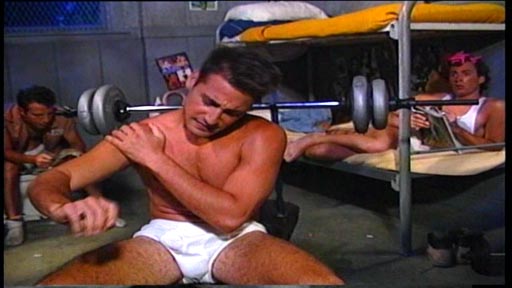 The opening credits include the line, ‘The story you are about to see is true. Only the underwear has been changed’… and regrettably that’s the highlight. There is little plot to speak of. The action takes place at one of those juvenile facilities where all the boys are in their mid-20s. Yes, there is a corrupt guard, a top dog, a new fish, a prisoner who is generous with his sexual favours, a gay priest who is too interested in the boys (and has the job of performing internal searches on them), a jail break, and the odd reference to other prison movies. But it is totally devoid of inspiration, seeming to believe that interaction between regularly unclothed young men should be enough to sustain the movie. Well, I did like the silliness of one character asserting that ‘there’s only one sure escape from this place: drugs… and comic books’, and where the would-be from another cell who, in a naked showerroom fist fight with the top dog, grabs a towel and tries to flick his opponent with it.

But it is so low budget, so deplorably acted, and so awfully scripted that it is hard to find reasons to award it even half a star. Just woeful.