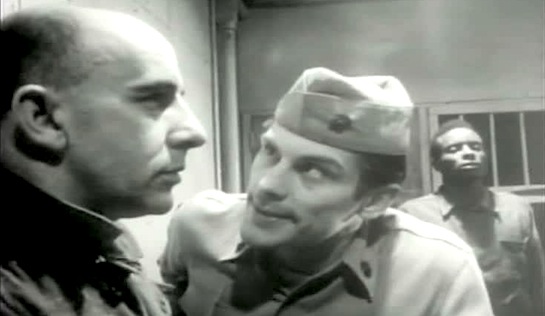 This documentary-style film by Jonas Mekas is based on a play by Kenneth H Brown. A former Marine, Brown had himself spent thirty days in such a brig at Camp Fuji in Japan for being absent without leave; no doubt the film’s authentic feel can be traced back to those thirty days.

All the action, so to speak, takes place on just one day, 7 March 1957, in the US Marine Corps’ Camp Fuji. From 4.30am the brig’s ten inmates are abused, bullied, assaulted, and made to do menial tasks without question. Everything is to be done on the double – dressing, bed-making, sweeping, shoe-tying, mopping, smoking, scrubbing. In the brief moments that the men are permitted to be at rest they are expected to stand upright beside their bunks, reading the brig’s Manual. They are referred to simply as Nos. 1 to 10. Or ‘maggots’. Their names are never used.

One inmate, No. 6, cracks under the pressure and is placed in a straightjacket. Otherwise, it’s just a normal day, with nothing much happening out of the ordinary. But it’s tiring watching ritual, systematic, frenetic humiliation and abuse. There is the constant noise of overlapping shouted orders and shouted responses, of boots, taunts, requests, work detail. Every time an inmate wants to cross a white line he has to request permission to do so. “Sir! Prisoner No. 1 requests permission to cross the white line, sir!” And if his toes aren’t close enough to the line when he asks, he may have to do so twice, or three times. The tension in the inmates as they try to avoid incurring any additional punishment from the guards is palpable. As is their fatigue.

It’s a little harrowing, but the viewer is somewhat let off the hook in the final scenes as the camera pans back to show that it is just a movie set. It’s a hook one is relieved to be let off. 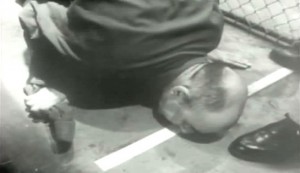 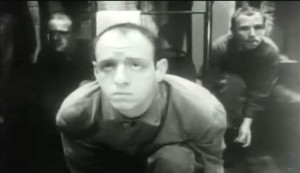