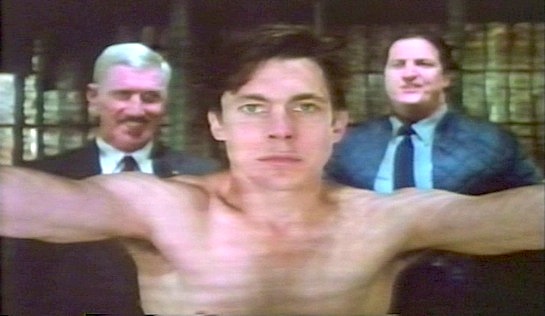 A warden with a past he’d rather forget. An idealistic psychiatrist running a new psycho-support program for prisoners. A prison not fit to house prisoners. A wrathful ghost of a former warden. And a film that mixes comedy and horror, but misses the mark on both counts… while remaining sort of amiable.

The action takes place in the ageing High Street Correctional Facility. Some years ago it was the scene of a massive riot spanning at least three days and culminating in the prisoners frying Warden Joe Callahan on his own electric chair – but his body was never found, and the prison was closed.

Psychiatrist Dr Harold Woodhouse (‘Woody’) Langer (an excellent James Coco) has convinced prison authorities to allow him to reopen the abandoned prison and run a new ‘Educational Guidance & Growth’ program there. He is given eight prisoners on whom to try out his innovative approach. The prisoners are allowed to wear civilian clothes, are given carrot juice each day, and are subjected to psychological testing and group work in brightly coloured rooms where they are encouraged to talk about their dreams and discuss their emotions.

It’s a small pilot, with a small staffing complement. The prison is run by toothy Warden Ed Dwyer (Paul Benedict), who is absolutely committed to the program. “Now, you’ve been chosen because somebody in Corrections thinks you ain’t a total loss,” he tells the newcomers. “I’m not convinced. But one thing’s for sure; you guys are getting a break. A break you and I both know you don’t deserve.” Very supportive.

‘Doc’ Langer is assisted by a young university graduate, Lisa Titus (Trini Alvarado), whose attempts at administering psychological tests to disinterested, sceptical prisoners provide much of the film’s humour. And provokes most of its eye-rolling. A ninth prisoner arrives: Rick Donner (Gary McCleery). He’s not in the same mould as the others; he’s smooth, asks to read Kafka and clasps Lisa’s hand through her initial interview with him. She doesn’t pull her hand away.

Aside from this nascent romance, weird things are happening. The prison’s antiquated electrical system claims two lives, a strange energy flashes around the cellblock and Warden Dwyer starts seeing bulging eyeballs in light globes. He doubts his sanity but at the same time knows only too well what it is; it is the ghost of Warden Callahan, whom Dwyer, as a much younger man, failed to assist when he was being strapped into the chair by his rioting prisoners.

The modern-day prisoners, spooked by the scary goings-on and increasingly convinced that they are being used as laboratory rats, ultimately behave like the unreconstructed men Warden Dwyer held them to be; they stab the well-intentioned ‘Doc’, break out of their cells, terrorise the vulnerable Lisa, and most – all bar Rick and transvestite ‘Wilma’ Johnson (Calvin Levels) – escape. Just ahead of the ghost of Warden Callahan exacting his awful revenge on his old, craven colleague.

The film is full of gentle humour targeting the Psychosupport Unit; from the extravagant, anxious, naive ‘Doc’, to the prisoners’ humouring of him as he endeavours to get them talking about their feelings, to the ensemble of characters including the massive Moshel ‘Tiny’ Davis (Ron Taylor) and the obsessive-compulsive disordered Anthony Mazzini (Mark von Holstein), and the prisoners echoing psychobabble as they menace Lisa.

As a horror film it will disappoint fans of the genre; too little tension, too little gore. But prison film buffs might enjoy the guards’ unconcealed distrust of any rehabilitative approach, the prisoners’ reticence to engage in the treatment process, and the familiar battle between the hard-line custodial staff and the do-gooding therapists.

Far from great, but enjoyable. 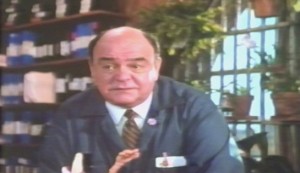 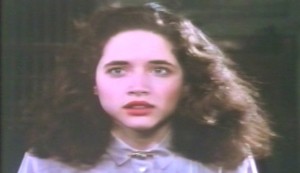