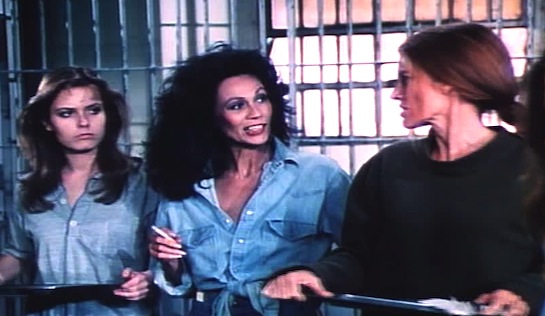 Three years after The Concrete Jungle was released, a film called Concrete Hell (aka Turning to Stone) hit the cinemas in Canada. There are plenty of parallels between the two, aside from their shared interest in building materials used in prison construction. Both feature young women charged with cocaine importation who are deserted by their male partners and dropped into brutal prisons which are controlled by big-haired queen bees. The Concrete Jungle definitely came first. Turning to Stone is definitely better.

In this Concrete it is an unwitting Elizabeth Demming (Tracy Bregman) who is used by her boyfriend Danny to traffic the cocaine (secreted inside her skis) into California. Like her counterpart Allison in Turning to Stone, misplaced loyalty means she doesn’t squeal. She gets 1 to 3.

Cat can do those things because she is in cahoots with Warden Fletcher (the horribly miscast Jill St John), and together they run a lucrative drug and prostitution business. Cat is not young but does have giant hair. She is also untouchable, but not because of her big hair. She has those who oppose her beaten, and has a habit of bumping off Cherry’s friends when they become inconvenient. She also arranges for certain prisoners to provide sexual services for clients; presumably not the male officers, as the only male guard we see more than once seems more interested in raping all the younger women. For all of this power and influence Cat has precious little to show for it; more volume-enhancing hair products and a better wardrobe than the others, maybe, but she continues to live inauspiciously in a big, spartan dormitory with all the others. She does, on the other hand, get to rename all her fellow prisoners and have no-one challenge her: not Icy, Spider, Sweets, Eyes, Drum, Cheeks… Oh, such power!

The prison’s Deputy Director of the Women’s Program, Shelly Meyers (Nita Talbot), knows that something’s going on, but can’t quite prove it. Rather than call the Police to investigate one of the suspicious deaths, which would clearly be too easy, she leans on Elizabeth to turn stoolie; Elizabeth asserts quite properly that Mrs Meyers is no different to the prisoners, wanting to take from her and give nothing in return. She gives the Deputy Director nothing, but this doesn’t get rid of Cat. Lose-Lose.

Elizabeth’s resolve to rid herself of the cancer of Cat ultimately leads to an appropriately farcical showdown between the two. Rather than catch Cat off-guard with a surprise attack, Elizabeth chooses instead to announce it from a distance while brandishing a shank made from a comb. So far away is she that Cat has time to obtain her own (metal) shank from her second, and could well have forged another. They tussle for some time without actually managing to stab each other, and then (escaping from riotous prisoners suddenly having their clothes ripped off in a mud bath) descend into one of those ridiculous subterranean plant rooms, strangely accessible directly from the prisoners’ exercise yard and big enough to service a small country. It’s here, in the shadows, that they face each other for a final time. Only one woman emerges.

Sadly, The Concrete Jungle is one of those films where the writers seem to be constantly guessing what prison might be like. There are attempts to provide glimpses of prison life to establish its credentials: a black Muslim couple are not to be messed with, we’re told, but then we see them no more. A woman gives birth in the dormitory, and is seen no more. If only it were tired old prison stereotypes of which we see no more. 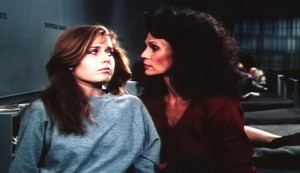 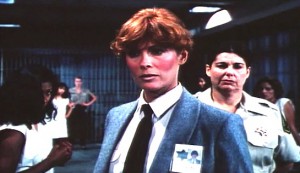