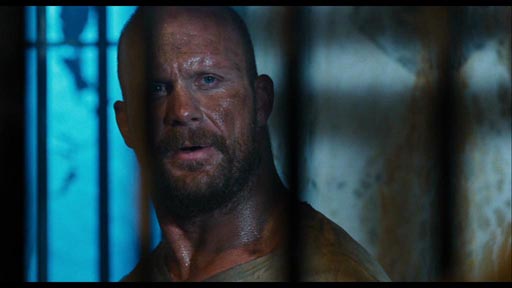 A film with a very strange moral centre. A young entrepreneur, Breckel, bribes prison bosses from around the world to give up their toughest Death Row inmates so that he can put ten of them (including two women) on an island and have them fight to the death, live in front of a paying internet audience. Well.. they were going to die anyway. When one of the women is raped on camera and another bloke is tortured before being killed, Breckel’s girlfriend and his chief technician start having misgivings and want to pull the plug on the more graphic bits. Like, they had no qualms about the concept of making a huge profit out of men and women killing each other on film, but this graphic violence is just plain wrong!

Fortunately, one of the prisoners is an American. He’s not like the others, who are dangerous killers and mercenaries. Conrad (ex-wrestler Steve Austin) was plucked from a prison in El Salvador where he was arrested after doing some dirty work on behalf of the US Government, smashing drug cartels and killing drug lords. Good, honest killing. He doesn’t enjoy killing, like the others do, but when he’s forced to can do it well. He can even defend himself, bare-handed, against other trained killers who have firearms, knives, crossbows and other weapons dropped from helicopters by the producers of the event to make it more interesting. Oh, and he has a blonde partner, waiting for him at home, which I’m sure none of the others do.

It’s a confused film. It wants you to enjoy the fighting (what is the film without it?), but wants you to appreciate that violence is bad, and the man who set the whole thing up is a very bad man indeed. So terrible is he, we want him to die really violently… at least until we remember that gratuitous violence is a terrible, terrible thing, and perhaps we should want him simply to be caught and held accountable for his actions and put in a prison cell in Papua New Guinea or wherever the island is.

While it’s got prisoners in it, and we see prisoners being recruited from prisons in exotic places like Belarus, it’s far from being a prison movie. It could be a dark social commentary on modern times and the entertainment industry; where Death Row prisoners can appear on a reality-TV show and where TV producers have the power to declare that the winner is able to forget all about those nasty things that got him onto Death Row in the first place. Or it could just be a film for an audience so moronic that it needs some overt TV commentary to alert us to the fact that watching snuff films cheapens and condemns us all. 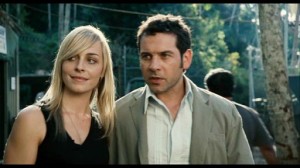 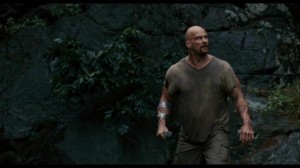