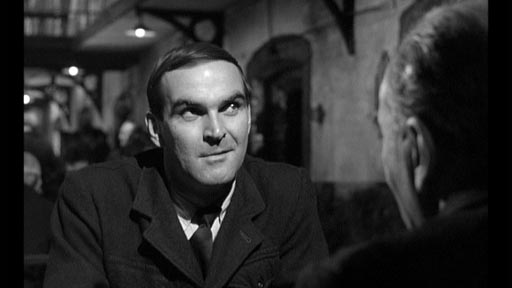 Also known as The Concrete Jungle. Advertised when it was released as ‘The Toughest Movie Ever Made in Britain’, this is part underworld movie and part prison movie.

Although directed by an American, Joseph Losey, it remains very British. It opens with the reception in prison of a police informer, Kelly, who is immediately thrown to the wolves and is predictably beaten in his cell as the rest of the block erupts in a cacophony of sound to conceal his cries. We never return to Kelly, but the scene is set: prison is a harsh place, ruled by thugs in collusion with callous prison officers. One of those thugs is Johnny Bannion (Stanley Baker), a tough man of the old school, both in and outside prison. Tough, but not too smart. Smart enough to run his wing in prison. Not smart enough to run the whole prison – the godfatherish Frank Saffron has that under control. Big enough in the underworld not to have to worry about money and to have attractive women throw themselves at him. Not smart enough to disguise himself when doing a big robbery of a racetrack in broad daylight, only weeks after his release. And more importantly, not smart enough to realise that while he still acts like he is Mr Big out on the streets, his #2, Carter – whom he treats pretty much with contempt – is two jumps ahead of him.

The prison scenes are classic British ‘60s; 19th century cellblocks, prisoners in jackets and ties, and lovingly filmed in gritty black and white. The differences in power and influence are stark: the foreigner Saffron is your quintessential crime boss in residence [think Noel Coward’s Mr Bridger in The Italian Job (1969)], while Bannion rules with his fists. On the prison officer side, Patrick Magee plays a fine Chief Warder Barrows, who is variously described as sinister and corrupt in film reviews, but essentially is an adherent to the ‘divide and conquer’ school of prison management and is not averse turning a blind eye in order to keep control; he shares as many characteristics with Chief Warder Mackay in Porridge as he does with the nastiest of prison officer villains. It also features, as one of Bannion’s henchmen, a violent buffoon, Clobber, who adds some distinctly Australian touches to the skulduggery.

When Carter and the bigger players put the screws on Bannion to recover the proceeds from the racetrack heist, an elaborate escape plan is put in place, but Bannion on the run is on a hiding to nothing. It’s like watching the demise of old-fashioned British gangsterism, and the advent of a new continental style of organised crime – spread to the prisons. 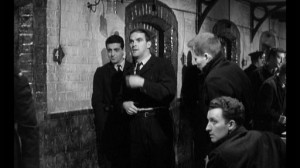 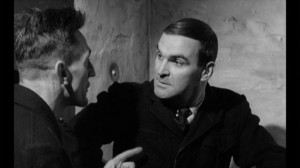