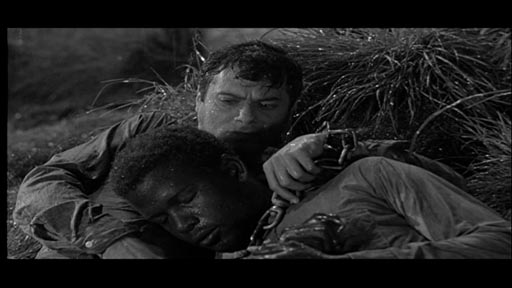 While lots of ‘Best Prison Movies’ lists include this nine-time Academy Award-nominated film, it’s hard to regard it as a prison movie when not one second of the film shows the main protagonists in jail.

Prisoners Joker Jackson (Tony Curtis) and Noah Cullen (Sidney Poitier) are in a prison van when it careers off the road in torrential rain.  They manage to escape, chained together at their wrists, and are pursued by a liberal Sheriff, a posse of Southern police and redneck locals, and a pack of bloodhounds.  Apart from the thriller element (will they get caught, and when they do get caught, will they get out alive?), the real drama is around the relationship between the two men – a proud black man and a racist white man. Predictably enough, they work through their violent disagreements and finish up respecting and caring about each other.

It was no doubt a much more brave and unusual message about racial tolerance in the 1950s; it now seems a bit dated. ??