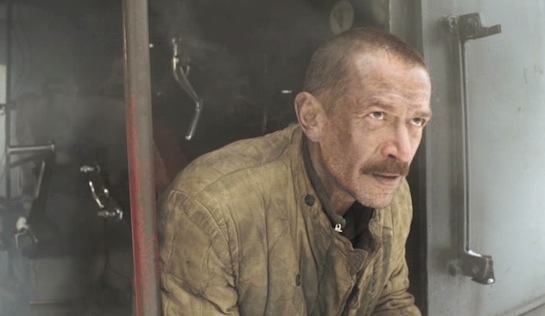 Don’t be fooled. Although this is set in a gulag, it’s far from a movie about prison life, or labour camp life. It’s a film about one man’s passion for trains – steam trains, with a touch of romance thrown in. And a bit of concussion. ‘Concussion’ in the broadest sense imaginable, so that at times it is used interchangeably with shell shock.

Ignat (Vladimir Mashkov), a former army sergeant and war hero, arrives at Krai, a Siberian gulag (and the film’s Russian title), to take on the role of head mechanic. It’s September 1945; the war is over, but the gulag is full of political prisoners – men and women – thought to have been collaborating with or sympathetic to the Germans.

Ignat quickly imposes himself on the camp. His file is marked ‘not to drive trains’ (the result of pushing one steam train to a highly dangerous 150km/hour), but it’s the trains that he’s come for. He tells the one-armed Commandant Kolivanov (Aleksey Gorbunov) that he will leave immediately if he can’t work on the trains. He promptly removes the train’s engineer and pushes out its driver, Stepan (Vyacheslav Krikunov), and then (to add salt to the wound) moves in on Stepan’s love, Sofiya (Yuliya Peresild). All the prisoners live in barracks except Sofiya (Sofie), who has a room to herself because she is the only one with a child – a young son, Pashka, believed to have been fathered by a German. Ignat moves seamlessly into her bed.

Not that he’s a natural or charismatic leader; one to whose authority others would normally bend, or to whom you might expect women to be attracted. He doesn’t smile. He has crippling seizures, and is psychologically damaged by the war. He is edgy, at times violent, and is bestowed the moniker ‘Concussed’. And he has a passion for trains that easily surpasses his regard for people.

To prove it, he leaves Sofie in search of an old, unclaimed locomotive on an island which has been stranded there due to a substantial break in the railway bridge. When he finds it, covered in dirt, rust and moss, he disturbs a young German woman, Elza (Anjorka Strechel) who has been sheltering in it since 1941 when Hitler breached the non-aggression pact with the Soviet Union and she fled as her travelling companions were being mown down. She attempts to return the favour and shoots at the Russian intruder. From there the relationship between Ingat (or Gnasha) and Elza battles with the train for centre stage.

He gets the lost, dormant locomotive working again. Despite not being able to speak Russian, Elza helps him mend the bridge – which they manage with extraordinary ingenuity and hard labour, with lengths of rail across the breach held up by makeshift wooden pylons. But when, somehow, the train makes it across the reconstructed bridge, with both of them on it, Elza is shunned by the gulag prisoners: she is wild, dirty and, notwithstanding that the camp is full of alleged collaborators with the enemy, German. Or, at the very least, not Russian. And because Ignat appears to be so protective of her, people assume (wrongly, at first) that she is a romantic rival to Sofie.

The more people ostracise her, and the more they make fun of his shabby train that they have rescued, the more Elza and Ignat are drawn together. She names their train Gustav – a little insensitively given the damage the Nazi’s giant Gustav gun caused to Russian fortifications at Sevastopol during the war – and the oddly patriotic prisoners attack them. The gulag’s train, driven by Stepan, and Ignat’s Gustav battle for supremacy; the trains race and hiss and snort like untamed beasts. Tension runs high – but it is only when the feared Major Fishman (Sergey Garmash) attends the camp and dispenses some very rough justice that things are really brought to  head.

The gulag is tough and cold; the prisoners united in their disrespect for their captors, their humour and their loyalty to each other. And as it contains both men and women prisoners, it has a very different feel to most prisons.

The Edge is an engrossing story and, without doubt, the best train-themed gulag movie you are ever likely to see.