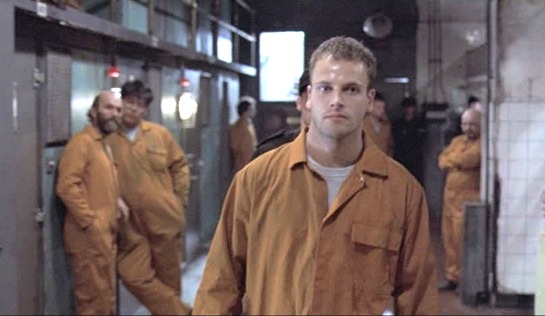 This may not have been the first of the law abiding citizen movies – where decent guys engineer their transfer to prison in order to avenge horrible things done to their family members – but it came before Doing Hard Time (2004), Law Abiding Citizen (2009) and Offender (2012). And as far as escapist action flicks go, The Escapist goes OK.

The wronged decent guy in this variation on a theme is pilot Denis Hopkins (Jonny Lee Miller), whose very pregnant wife Valerie is shot in a home invasion by your common or garden variety psychopath on the run from Dartmoor Prison, Ricky Barnes (Andy Serkis), with a little help from some friends. Valerie dies in hospital but the baby is delivered and survives. Barnes gets 20 years. Hopkins is unable to face his baby daughter, and is consumed by his desire to kill his wife’s killer.

He fakes his own suicide, leaving his house and daughter to his sister-in-law, and sets out to have himself transferred to Sullen Voe, the Alcatraz-ish high security island prison to which he knows Barnes has been sent. He starts modestly, earning a 7-day sentence for attacking a police car, and gradually extends his stay by attempting to escape from whichever prison in which he is housed. He refuses to give his name, but then adopts the moniker ‘John Watt’ when he tells one prisoner that his name is John and is asked, “John what?”.

Watt is a pest. Why the British prison authorities don’t just lock him up in a nice, secure cell until his sentence expires is not clear; perhaps they respect prisoners’ right to try to escape and want to offer him a sporting chance. They move him from prison to prison, each prompting a new escape attempt, and dress him in ‘patches’ – a gaudy green and yellow uniform designed to make him stand out in a crowd. The uniform, however, doesn’t stop him from ultimately escaping from the Category B Ulathorn Prison with his cellmate Ron Slimbridge (Gary Lewis)… with some assistance from a corruptible prison officer. The escape is successful in that it earns him a Category A security rating and a trip to Sullen Voe. Lucky they didn’t send him to another Category A prison, you might be entitled to think.

Sullen Voe is as miserable and grimy as it sounds, with its very own coal mine. Barnes is held in a different wing to Watt, but manages to wield influence throughout the whole prison. Watt’s true identity has been exposed as a result of a nasty tangle with one of Barnes’s co-offenders, Spaz, at Ulathorn, and both prison officers and prisoners at Sullen Voe give him a warm welcome.

Watt bides his time poorly. When he finally looks to have his moment to have it out with Barnes, Barnes is one step ahead. He sets off an explosion, commandeers the attending ambulance, takes Watt hostage, and then commandeers the air ambulance with Watt as his pilot, his son Joey back on the ground holding Watt’s daughter at gunpoint to prevent the grieving husband from attempting a kamikaze stunt.

“But in an unexpected, full-throttle finale, will Denis find justice, or become a victim himself?” the DVD jacket asks, as if no-one has ever seen an action movie before or, having seen one, has somehow failed to comprehend the way these films pan out.

Nonetheless, I kind of liked it. I liked the prison merry-go-round, even though it would have been so much more sensible to have taken away all Watt’s hope of escaping very early in the piece. I liked Gary Lewis’s Scottishness as a counterpoint to Jonny Lee Miller’s middle-class blandness, even though Vas Blackwood as Vin was no doubt supposed to fulfil that role. And I liked the name ‘Sullen Voe’, as opposed to the concept of it – given that the mix of high security prisoners, heavy machinery and explosives would always seem to be one destined to end in tears.

This is one of the better examples of the prison action genre. 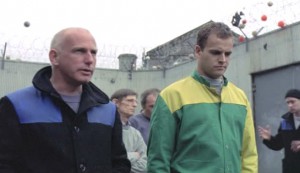 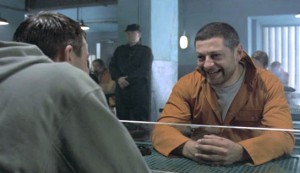