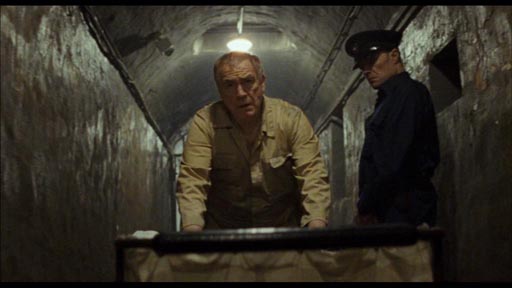 A curious mix of British prison architecture (well, Dublin’s Kilmainham Jail), the look and feel of a US reality TV show (think ‘Britain’s Unruliest Prisons’ with prisoners dressed in thin beige boilersuits), and some very un-American and unexpected plot twists that unapologetically break faith with the genre.

Early in the piece we see the escape already in progress; four youngish fit blokes and, bringing up the rear, ageing lifer Frank Perry (Brian Cox). As the story unfolds, we learn that after 14 years of having his letters home returned unopened, Frank has unexpectedly received one from his wife, informing him that his daughter is drug addicted and has OD’d several times. The plan to escape, then, is his – to see her, or to sort out those supplying her drugs – and he has enlisted the help of the others. You can’t blame him. He’s not afforded the respect due a man of his age and sentence, and it’s a pretty miserable existence well worth escaping from; old, small, double-bunked cells, a prisoner group that is (unusually for a British movie) allowed to do whatever it wants with no sensible interference from ineffectual prison officers, and an unpleasant young prisoner with dyed hair who improbably runs the nick.

The escape-in-progress action is intermittently and very effectively cut into the drama which precedes it, but then the escapers clumsily stray into a range of movie sets left over from The Poseidon Adventure, possibly Indiana Jones and the Temple of Doom, and something to do with catacombs. With prison officers hot in pursuit – and then, all of a sudden, not.

It’s all a big con. The film kicks off dutifully following many of the conventions of escape movies, à la Prison Break, and then, just when you’re comfortable, smashes them to bits. Good job, too, because it made me forget, for a minute or two, just how alien the level of disorder and the Fight Club-like sequence appear in a Pentonvillian prison.

Unusual and, I must say, ultimately rewarding. 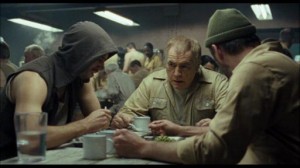 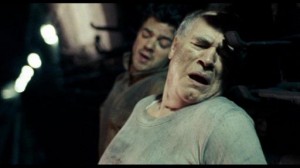