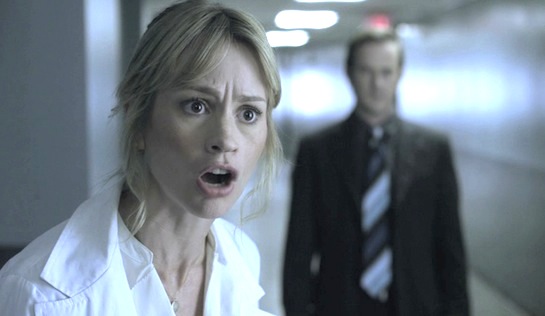 Low budget horror: three words that should strike trepidation into each and every audient. But The Evil Gene manages to come up with a twist or two that sets it apart from many others, which is to say that it is not an unmitigated disaster.

Godfrey Correctional Facility is sort of a ‘black prison’ – a top secret institution for dangerous prisoners who have the newly-revealed HSS-282 gene, which is linked to psychotic breakdowns and violence in 100% of carriers. 17 inmates have been given death sentence reprieves in return for volunteering to be guinea pigs in new experimental treatments, combining pharmacological and therapeutic approaches. The research hasn’t always gone smoothly; three guards to date have been killed. And the head researcher, Dr Mobley, has just been found dead from an apparent suicide.

But something’s not right. Mobley would seem to have shot himself but questions arise as to how he had a gun in the secure area, and no-one thought he was depressed. The FBI has been asked to confirm the initial suicide finding… and who better to send in to investigate than troubled agent Griff Krenshaw (Richard Speight Jr), in lieu of him being stood down over an avoidable shooting?

Mobley has left an interesting trail. The facility’s crusty Warden Sweeney (Lindsey Ginter) is unequivocally dismissive of Mobley’s body of work as the work of a man gone mad, and Agent Krenshaw has the task of discerning the truth surrounding the claimed suicide from the doctor’s apocalyptic drawings and algebraic formulae, collected photographs of contorted dead people, and odd groanings from outside his office. Spooky, huh?

Helping Krenshaw unravel the mysteries is Mobley’s widowed assistant, Dr Dana Ehrhart (Cameron Richardson), who is beautiful enough to ensure at least two of the following: (a) she will be taken hostage by the prisoners; (b) there will be sexual tension between her and Krenshaw; (c) she is an alien; (d) she has something to hide; and (e) despite her excellent credentials, she will never be taken seriously by the crusty old warden.

Krenshaw, however, has some unravelling of his own to do. He has PTSD from eight years in military counter-terrorism (for which he gulps down anti-depressants like lollies), and a brother who killed his whole family and then himself, and who continues to haunt him. A non-believer, he senses evil and toys with the idea that the whole prison is demon-possessed, and that HSS-282 is the vindication of the references to the ‘mark of the beast’ in the book of Revelation. And he brings about his own apocalypse. With a twist or two, as I said.

It never helps a prison movie when the budget is too small to allow a cast of more than five prisoners who are supposed to represent the entire prison population. The Evil Gene doesn’t fall for that trap, entirely, but it does make some fatal prison movie errors. “Security room. Eyes and ears of Godfrey,” one guard explains to Krenshaw on his first day. “Inmates can’t spit, shit or shower without us knowing about it.” And then we’re led into an unmanned control room with just three CCTV monitors. Hmmm. Maybe they could get away with just a quick spit. Later, a lone guard walks past the cell of the ruthless drug cartel king Juan Morales (Anthony L Fernandez), apparently writhing in pain. He immediately opens the cell door to render assistance, and is inevitably overpowered and killed. In a high security prison with super violent prisoners? I don’t think so. Later still, when all prisoners have been released from their cells and are running amok, the Warden and four of his guards put on riot gear and wade into the fray. No, no, no. No.

It is a neat, unpretentious film…. more thriller than horror, and perhaps more fantasy prison than prison. But neat.