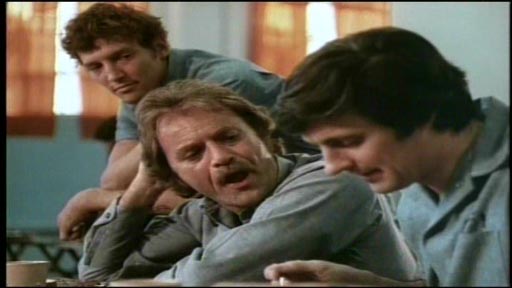 This is your line-and-length type prison movie, scoring awfully high on the cliché count. Which is a shame because it’s co-written by Truman Capote and is filmed grainily on location in a prison in Salt Lake City (I just can’t work out which one) with plenty of prisoners as extras. The backdrop is stunning and the film should be better.

Alan Alda plays Jonathon Paige, a college professor who is improbably serving 12 months for manslaughter. He starts his stretch with a young kid who you just know is going to get used and abused, especially when he is taken under the wing of the prison’s tough-guy and Mr Big, Hugo Slocum (Vic Morrow). Paige also brings strife upon himself as he refuses to supply Hugo with drugs from the pharmacy, where he works, on moral grounds. Bad move. You know that the kid, who is being looked after, is going to have to pay the piper at some stage, and when he doesn’t he is predictably beaten and raped.

Just about the only unknown factor is a new guard, who started the same day as the two prisoners and who saw some things that he didn’t like in a military prison during the war Vietnam. His unease with his warden’s and fellow guards’ indifference to the violence and worsening tension is less predictable than the whole rest of the movie. Well, the manner of Paige’s demise isn’t all that predictable, it must be said.

While Alda (edgily flouncy and fearful at the same time) and the menacing Morrow and his team of thugs are excellent, and it’s grim and real, its theme of ‘don’t mess with the establishment (on either side)’ isn’t a particularly novel one. The only other character with something a bit different to say, Paige’s African-American ‘political’ workmate, is given little air time; it seems that it might complicate things if we better understood his way of viewing the world. 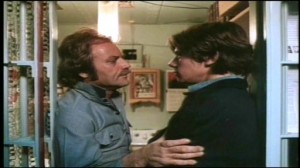