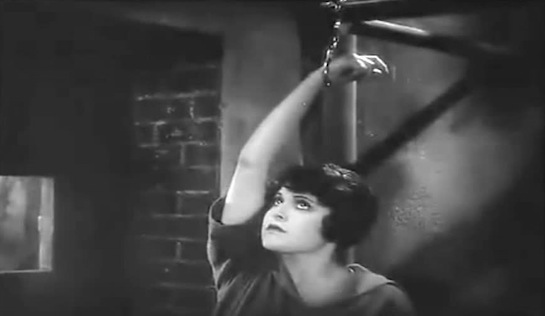 Cecil B De Mille directed this epic silent film – an unashamed advertisement for Godfulness. Not surprisingly, given its title, it features a godless girl, but it’s more about her conversion to the God-positive side, than focusing on all the nastiness and trouble that her godlessness brings.

It starts with a schoolyard battle between members of the Atheist Society, led by the godless Judy Craig (Lina Basquette), and the opposing God-fearing students, led by the President of the student body, Bob Hathaway (George Duryea, playing a teenager at 33). Things go a little awry when the Christian supporters storm a meeting of the Atheists and a riot ensues. One young man, ‘Bozo’ Johnson, who minutes earlier had backed out from his induction into the Atheists on learning that he might no longer get to observe Christmas holidays, is forced by the fighting into a young woman who crashes through the balustrade and falls several storeys to her death. Judy, Bob and Bozo are all convicted of manslaughter – at least two a little unluckily, it must be said – and sent off to reform school.

The State Reform School for Boys is separated from the State Reform School for Girls by a cyclone wire fence. Both institutions are strict, highly regulated, and places where discipline is paramount. There are ‘Silence’ notices everywhere, but because it is a silent movie it’s hard to tell whether these are observed. Neither the two boys nor Judy have easy introductions to their juvenile detention, symbolised by all three having bits of their hair hacked away as a welcoming ritual.

Judy immediately teams up with the blonde Bible-believing Mame (Marie Prevost), who is a trusty… until Judy throws her Bible on the floor and Mame tells the Matron that she, and not Judy, dropped it. Accidentally. The Matron promptly strips her of her ‘Honor’ status for lying to protect a fellow prisoner, and both are consigned to garbage detail.

Meanwhile Bob accidentally sprays the Head Guard, known only as ‘The Brute’ (Noah Beery) with water and is hosed down with a high pressure hose as punishment. He too is sent off to garbage duties.

This fortuitously allows Judy and Bob to reunite – on opposite sides of that fence. Mame, too, chats up Bob and both girls fall in love with him.  Judy and Bob are seen by The Brute touching hands through the fence… so flicks a switch to electrify it. When he turns it off, Judy has a sign of the cross burnt into both palms. Already she has been weakening in her position on God by witnessing Mame’s goodness first hand and reflecting on her own sinfulness – and now she has these stigmata!

Soon afterwards, Bozo is caught by The Brute passing a doughnut to Bob, who is on a bread and water diet in solitary for his part in the hand-holding affair. As punishment Bozo is half killed by The Brute, who later returns to deal with Bob, who in turn manages to evade him and escape, locking the guard into the cell. He then overpowers a prisoner about to deliver supplies to the Girls’ Meat House, where Judy and Mame now work, and arrives with his horse and cart, intent upon escape. Mame hopes that he has come for her… but despite her disappointment on learning otherwise, magnanimously creates a diversion to allow Judy to flee in the back of the cart.

While on the run, Bob and Judy get to resolve all the sexual tension that has existed between them. Their brief time at large is all happiness and light; Judy frolics naked in a pond, drapes herself over trees, and is entertained by squirrels. She is in love, and comes to realise that the wonderful world could only have been created by God.

But then they get caught, and both are thrown into solitary. Both are handcuffed to fixtures in the cell – Judy rather more cruelly as her cuffs allow her to neither sit nor lie down.

And then a huge fire starts. Both are vulnerable as staff run to fight the fire, forgetting them, and the girls don’t help by trying to sabotage all attempts to put out the fire, hoping that the more the place burns the greater the chance of escape. But Bob doesn’t forget Judy, and after he has been released from his cell he climbs into the girls’ prison to rescue her… along the way fighting with The Brute who would rather get himself to safety than try to release a threatened prisoner. Judy prays fervently, and her prayers are answered; Bob manages to get The Brute’s keys when the guard is accidentally electrocuted and – such is their goodness – they both go back through the dangerously ablaze building after Judy is released to rescue The (stricken) Brute.

The Brute doesn’t survive for much longer – but in his dying breath tells an Inspector that Bob, Judy, Mame and Bozo all deserve to be released. And they are. Joy all round!

At over two hours it is a longish saga, but it’s a film that reveals itself slowly. The model Christian Bob never seems to accept responsibility for provoking the riot in which the girl died, and wanders around not very uplifted and continually likening the reform school to Hell, which doesn’t seem entirely proper. The godless girl Judy, on the other hand, seems altogether more appreciative of the goodness in the world and in others. It is certainly possible that de Mille intended Judy’s ‘Godless’ tag ironically… but from the opening scenes you would never have thunk it. 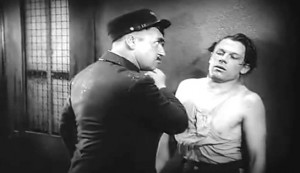 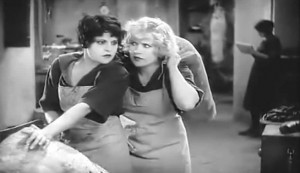 Thanks to Melian for bringing such a Godful offering to my attention.