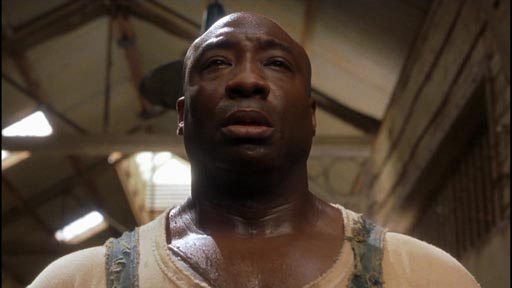 Is this a prison movie?  I have no idea.  It’s set in a prison – on Death Row (where prisoners walk their last mile – here, on green linoleum) in a 1930s Louisiana prison, Cold Mountain Penitentiary – and there are some superb prison characters, but it’s also a spiritual, miracle-filled fantasy that at times has as much to do with the prison experience as, say, Bewitched.

Well, that’s maybe a bit harsh because no matter what it is, it’s a fine movie, superbly cast and acted.  Tom Hanks plays the steady OIC of the Green Mile, Paul Edgecomb, who leads a team of mainly decent, humane, respectful men who don’t want to make the prisoners’ final days any more difficult or less dignified than they already are.  Percy Wetmore (Doug Hutchison) – mean and vicious with small man’s syndrome, who is desperate to see the Mile’s occupants fry – is the single exception, but he is also the State Governor’s wife’s nephew, so he’s a bit untouchable.

Enter John Coffey (Michael Clarke Duncan), a giant African-American sentenced to death for the rape and murder of two young white girls.  Coffey is vulnerable and childlike and – notwithstanding the offence with which he’s been charged – has a child’s purity of spirit.  Then he starts doing stuff, like curing Edgecomb’s urinary tract infection, and bringing another prisoner’s pet mouse back from the dead – sucking out all the nastiness with his magical powers.  This gift places the guards in a series of moral dilemmas. You can either go with the story, or start asking questions like, “What sort of roster are these blokes on, where it’s the same four or five men on every shift, day and night?”  And, “Would a large, armed redneck posse in the 1930s really have let Coffey be taken alive when he was found with the two bloodied and dead girls in his lap?”  It’s best just to submit to the story, and go along for the long ride, even when loose ends start tying themselves up too neatly and the mouse (now at least 64 years old) makes a bizarre reappearance. 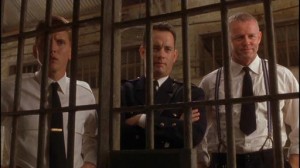 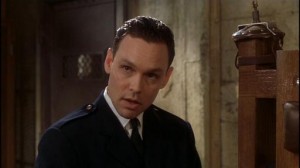