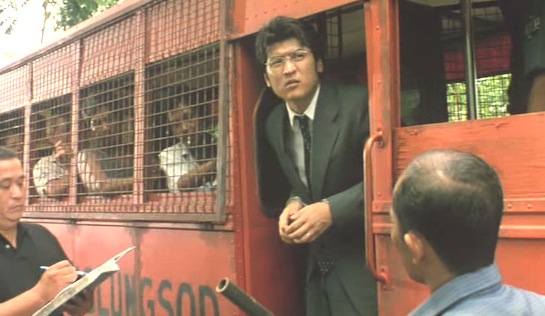 “Here, I don’t find any inconvenience. This is heaven, isn’t it?” says one prisoner of the Filipino jail in which he’s banged up. And it is something of a safe haven for a select few – a place where money can buy anything, where one can carry on one’s illegal activities without too much interference, and where one can hide away from one’s enemies.

Not that Kohei Hayasake (Kôji Kikkawa) sees it that way, at first. He is a staid young Japanese businessman, charged in the Philippines with trafficking 1kg heroin. It seems that he’s innocent, but that hasn’t prevented him from having a lazy $1 million salted away in the freezer of a Manila eatery – a  most prescient contingency.

The City Jail in which he’s held awaiting trial is noisy, crowded and chaotic… but not for the small number of Japanese who, for a fee, can live in relative comfort. Kohei is quickly recruited by Katsuaki Yoshida (Tsutomu Yamazaki), who gives the impression of being connected to the yakuza and lives in his own beautifully appointed apartment within the jail, with his own transvestite servant to attend to his needs. Oh, and it also has a clean toilet. Yoshida recognises Kohei’s commercial potential – not his business acumen, exactly, but rather his businessman’s looks, which will attract little attention as he exchanges briefcases full of drugs and money with clients in city hotels.

Yoshida is able to arrange this because, it is soon evident, prisoners with money can get anything they want. For a payment to the warden (who takes a sizeable cut of the drug money) and other guards, Yoshida and others can come and go from the prison as they like. And operate their businesses as they like.

Kohei is initially a little loath to work for Yoshida – still hopeful that he might be found not guilty on the drug charges. But he doesn’t read the system well, and doesn’t pay off the right people. And then he is reminded that the people who he can trust the best are the people inside with him. Not his company or its representative who stands to gain both Kohei’s job and his wife Miyuki if he is convicted, but people like Yoshida and Jun Sakamoto (Hua Rong Weng), a paedophile doctor, and Namie Mishima (Nene Otsuka), a high-profile embezzler. Well, maybe not Sakamoto, who has Kohei drugged and tries to sell him off for body parts. Or Yoshida, who leaves him for dead when the real yakuza spot him outside the jail. Best to trust no-one.

When the yakuza come back to the prison, looking for Yoshida, who has ripped them off, and the local Filipino prisoners turn against the Japanese in an ugly mob, the Japanese decide it’s time to flee. They stop in an isolated village in the jungle to help a young girl (yes, with Sakamoto at the forefront) but are tracked down by the yakuza. The silliest of chases ensues, and to ensure the silliness continues, one of the wounded Japanese men, Taro (Kenji Mizuhashi), is deified by the villagers. One man’s Paradise.

This quirky Takashi Miike film presents a far-from-complimentary picture of the Filipino prison system: endemic corruption, chronic overcrowding and terminal under-resourcing. A system that caters for the wealthy at the expense of those without means – reflecting too closely that outside world from which all prisons are populated, perhaps.

Western cultures that exalt a blindfolded Lady Justice generally expect that prison systems should similarly be impartial in their treatment of inmates. Few systems probably achieve it, although the one in this film (if it’s anywhere near an accurate portrayal of a Filipino jail) might be at one extreme end of the spectrum.

Kohei and his friends are able to ultimately escape because they have money and contacts – and those of that group who survive are no doubt well placed to create new lives for themselves. That’s less true for the masses they leave behind. 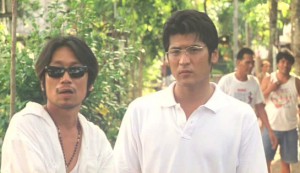 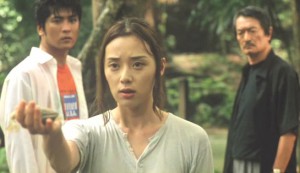