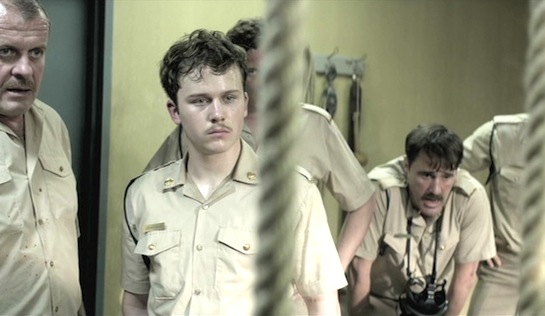 “You cannot ask a man to be both shepherd and butcher at the same time,” spits defence counsel John Weber (Steve Coogan) in his closing address to the judge and his two assessors. On trial is a teenaged prison guard and father, Leon Labuschagne (Garion Dowds), accused of killing seven black African footballers one rainy night. There is no doubt he shot and killed the men, but Weber asks the Court to find that Labuschagne’s actions were the direct result of the inherent trauma in his job: caring for men on Death Row, reading the Bible to them, dealing with their families, then taking their measurements, leading them to the gallows, and even rehanging them if the first drop did not produce the desired effect and the condemned man was being strangled slowly at the end of the rope. Both shepherd and butcher.

The story is said to be ‘inspired by true events.’ It is set in 1987, a year when South Africa hanged 164 people. In the same year Iran executed 160, China 132 and the US 25; South Africa hanged more prisoners than any other country. Nearly all were black. Many were convicted of offences waged in the war against apartheid. Included in the tally of 164 were three successive days on which seven men were hanged, simultaneously, with one pull of the lever.

In the film, Labuschagne is said to be present in the Pretoria Central Prison at all 164 deaths, officiating along with others, helping men to die. He had been working on Death Row from his first day in the job, two years earlier, when he was just 17. He has had no training to prepare him for executing prisoners, and no counselling. He has been threatened with disciplinary action and dismissal if he talks about his work outside the prison. Peer pressure and the intimidating Warrant Officer ensure that any emotional response to the job must be kept well stifled.

And then one day, in the run of 21 hangings in three days, he draws the short straw and has to bury the seven men whom he has helped execute after a major battle. He is injured in a car accident on the way to the cemetery and his workmate absconds, leaving him alone to heave the bodies out of the van and into the graves. Driving home, dog tired, he is overtaken by a group of rowdy footballers in heavy rain and finds himself alone with them in an isolated spot; he claims to have smelled the rope and heard the trapdoor… he pulls his pistol and shoots the lot.

But he says none of this before he gets into the witness box; he is almost catatonic at his initial meetings with his legal team. At trial, his lawyer, Weber, tries to prise out from him what made him crack that night. It’s hard work, and irritates the judge, the prosecutor Kathleen Marais (Andrea Riseborough), the victims’ families, popular opinion, and Labuschagne’s own family, who see their son and brother shutting down and resisting being taken to those very dark places – without appreciating that it is only his testimony about the impact of participating in brutal executions at such a young age, and with no support, that will allow him to escape the noose himself.

The film is decidedly anti-capital punishment, but with the abolition of capital punishment in South Africa having occurred in June 1995 under Manela’s presidency, it could be said to speak mainly to those from that country and elsewhere who push for its retention or reintroduction. But it also speaks for all those whose job as killers is sanctioned by the State aside from the hangmen depicted here – such as those in the armed services and special agents – and scrutinises the toll that such actions must take on those public servants.

It’s ultimately more courtroom drama than prison film, but even as a prison film it’s one that may mean different things to different people. It does not shy away from the brutality of the executions, with some of the men terrified, and bowels and bladders being involuntarily evacuated, both before and after the trapdoor opens. There will be those who recognise the complexity of Labuschagne’s relationship with the job; simultaneously contributing to or celebrating the more brutal aspects of the role, and at the same time being distressed and bruised by them. And I’m sure that there are some who will take the shepherds and butchers analogy and argue that it is equally impossible to be both a caseworker and the enforcer of security and discipline, as is required of many modern prison officers worldwide.

If you can get past the notion that any 17-year-old would be thrown into working in such a way on Death Row, it is a powerful and compelling story. 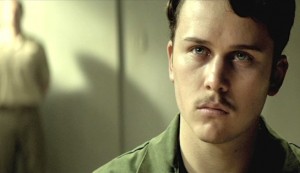 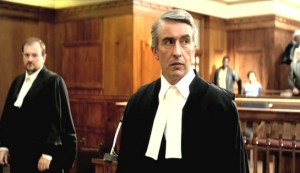