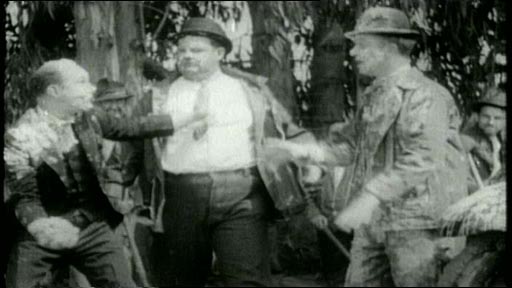 Laurel & Hardy find themselves in the hoose-gow (ie jail, or work camp in this instance, the word derived from the Mexican Spanish juzgado meaning tribunal more than jail, apparently). Anyway, they are your innocent bystander-type prisoners, very much out of their depth. Luckily, it is an extraordinarily benign prison; in just 18 minutes they manage to kick a warder in the behind, escape (only to return after being shot in their respective backsides), and eat the warder’s lunch – all with no particular consequence.

For their finale, they puncture the radiator of the Governor’s car (the visiting State Governor in all his pomp, that is, not the prison governor), stop the leak by filling it with rice, and then spark a rice fight involving all the dignitaries (including the females in the party) and some prisoners after the radiator cap blows and gluggy rice spews everywhere.

It’s incisive, biting satire as the all-in demonstrates that there is essentially little that separates the high-and-mighty and the downtrodden, criminalised working classes in Depression-era America. Either that, or they thought that pie-in-your-face-variation-comedy was pretty funny. I suspect the latter. There are plenty of other Laurel & Hardy prison films, including No Place Like Jail (1918) and Detained (1924) – both featuring Stan Laurel on his own, and The Second 100 Years (1927, which I’ve also seen) and Pardon Us (1931); I’m in no hurry to track the rest down.